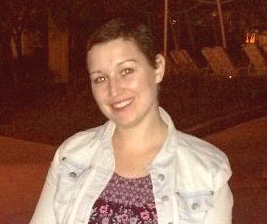 I had a regular smear test in 2012 which came back normal but when I fell pregnant in 2013 I started bleeding quite early on and this continued throughout the pregnancy. I had several check ups and all seemed fine.

When I went into labour doctors saw that there was something wrong with my cervix. So a week after giving birth I had a biopsy. A week later I was told I had cervical cancer. I broke into tears, I simply couldn't believe what was happening.

To be staged I had to go for a PET scan and then wait for the results. The waiting is just so frightening. Luckily, they told me it hadn't spread which was a huge relief but after the initial relief I remembered, even though it hadn't spread, it was still there; I still had cancer. The cancer was stage 2b and I was told I needed chemotherapy, radiotherapy and brachytherapy. Even though I was so happy about just having had a son, with the treatment leading to infertility, I was devastated that the decision to have more kids was being taken away from me.

On 21 March 2014 I had my first chemotherapy session. I had to have two different types of chemotherapy for three months, then a six week course of chemo and radiotherapy together and in the end I also had brachytherapy. Because of the intensity of the chemotherapy I lost all my hair. I was extremely tired and sick and when I received radiotherapy, I also started to have bowel problems which even today I sometimes still have.

On 22 August 2014 I finished treatment and I had my first check up in October 2014 and it all looks positive.

Of course the cancer has impacted on my life. After treatment I had to start using dilators because the vagina was just so tender. It's not a nice thing but it gradually gets easier and my husband is really patient and is really open with me which helps. The whole experience has an impact on your sex life because of the tenderness and you also bleed during sex. I have also had some bleeding during intercourse and even though I knew that was normal after the treatment, it worried me and so I mentioned it at my hospital appointments. I was told it was just the scar tissue breaking down and there was nothing to worry about.

Six months on things are a lot better, the area is a lot less tender and we can enjoy being together again. Light bleeding still occurs from intercourse and the area is definitely tighter if I’m not using the dilators or having intercourse regularly enough. The scar tissue feels like a barrier but you just have to accept that it's there.

Another side-effect of treatment is early menopause and I have hot flushes which is strange at 32. HRT has cleared those up but it still feels wrong to be going through something I associate with older women. I've had a few urine infections since the end of treatment which is to be expected and bowel issues continue but there has been a massive improvement through watching what I eat.

Going through a cancer diagnosis and treatment does of course have an emotional impact. I used to break down in tears just hearing certain songs on the radio and especially when you hear about people dying. Life goes back to normal for everyone when the treatment is finished but you're still living it every day and it's definitely a rollercoaster of emotions when the treatment stops; it's hard to know how to move forward. I was lucky to not only have such supportive friends and family but also to have stayed friends with three other girls I met during treatment.

I'm living life to the full now - a big positive to come out of this experience.  I'm not the same person in lots of ways but hopefully I'm now a better person.