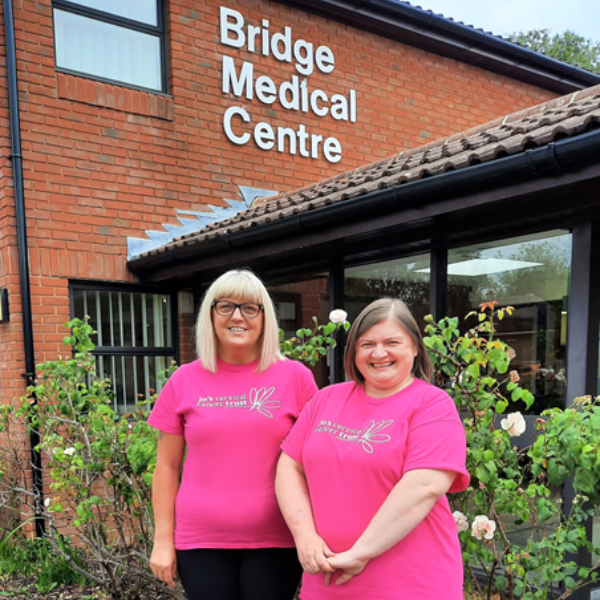 I lead in cervical screening at my Practice and, along with my colleague Lesley, am very passionate about quality improvement and improving access to services.

Our Practice looks after a hotel locally, which houses Afghanistan refugees as part of the Resettlement Scheme. There are lots of young families in particular and we have a good relationship with the Senior Partnership Liaison Officer and those involved in their care. We get notified when new families arrive so that relevant health checks, childhood immunisations and other tests can be arranged.

Cervical screening isn’t offered in Afghanistan, so we had a population with no awareness of the test or of HPV. The hotel isn’t on a bus route either, so we knew we had to bring screening to the group.

With the support of my Practice, I did some research about how we should approach it and asked the women’s lead at the hotel, who speaks good English, about her thoughts.  She said fear of unknown and lack of understanding about the test were two of the biggest barriers. It was clear that we needed to get the right information resources and identified Pashto and Dari as the two most spoken languages. We worked with Jo’s Cervical Cancer Trust to translate films into the languages we needed.

We arranged a session to provide education about the screening and we booked a conference room and a female translator.  A morning was selected when children were at school to avoid any distractions.  The men generally now take children to school so we chose a time they would be around in case they wanted to be there.  It helped that we knew lots of the patients already through the childhood immunisation programme, which had built trust and rapport.

We pre-advised the women of what we were going to be talking about, and this was shared through the WhatsApp group via the women’s lead and the management team at the hotel. We also made sure to introduce ourselves before each session.

We started by playing the translated films followed by a Q&A session, working with the translator to check understanding at different points.  Not everyone turned up initially so we put on extra sessions, which was anticipated.  It went really smoothly - we were expecting more questions or concerns but there weren’t many.  Only one man attended, who was initially reluctant for his wife to be screened, but we showed him the film and, in the end, he said he wanted his wife to go ahead. She did, which was another positive step.

Around 20 were eligible for screening. Others were too young or pregnant or currently menstruating. The ladies who were menstruating still attended the session but agreed to come to the surgery for screening instead.

Organising the screening clinic was quite straightforward. We booked a room in the hotel, chose a date and time and told the women.  We made sure to follow all relevant infection control and data protection procedures.  I checked with the Medical Defence Union (MDU) that I was covered to do screening outside of the Practice.

We sourced the equipment, making sure we had a height-adjustable couch of the right weight limit and a portable lamp, which we borrowed from the Practice (normally used for minor lumps and bumps removal). To protect privacy and ensure the women felt comfortable, we put up translated “no entry” signs on the door and made sure we could the lock the room from the inside.  We put couch paper on the windows to ensure privacy as there were no blinds.  Conveniently, the conference room which we used as a waiting room was next to the room we used for the procedure itself.

The translator explained what was happening and we offered chaperones including the translator, but none of the women wanted this. This meant it was just my colleague and I in the room. We established non-verbal signals beforehand, such as a thumbs up signalled we were going to touch them, signals for stop, I’m ok, feeling unsure. This worked really well.

Once the first woman had received her smear we sent her back to the group which really helped with positive reinforcement as, in the end, everyone who was eligible was screened.  Word of mouth is key to success in screening - if someone has a good experience they’re more likely to tell their friends. I think the next clinic will be easier as we already have women sharing messages about their experience.

What we’re planning next

We’re getting a lot of interest from other practices in the area which is great. We’ll do another clinic in the autumn when more women become eligible or have had their children.  We’re starting to look at our new Ukranian population too. These women are more likely to come into the Practice, but again screening isn’t routinely offered in Ukraine, so Ukrainian translated films will be key and Jo’s Cervical Cancer Trust is currently working on these.

We use films a lot with our non-attenders.  If patients don’t speak English, I’ll Google translate “I’m going to show you a video” and show them a film in their language which helps to start a conversation about screening.  We also send films by text when we send out reminders.  If you don’t use them, I’d recommend checking out all the resources Jo’s Cervical Cancer Trust have.

We’re trying a lot of different things to encourage attendance across our whole eligible population and have seen a big uplift. Texts, phone calls explaining screening process, using Easy Reads, home visits, posters up in Practice and working with our Care Coordinators.

It’s so important that we try to reach non-attenders and identify the best way to do this. Building a rapport really helped, so take your time but don’t be afraid to try different things.  We said we wanted to give it go and learn from our mistakes.  In the end it worked really well.  I’ve seen women with cervical cancer who have never attended screening, and while we can’t prevent every case, we should be doing all we can to prevent as many as possible.

For support about cervical screening, here's how we can help >