Cervical screening when you are visually impaired

Cervical screening (smear tests) can be difficult for women and people with a cervix with a physical disability. We hear from Sam Attwell, who set up Blind Since Birth UK. She is registered blind and shares her experience of two very different cervical screening appointments, and her tips on making the test better. 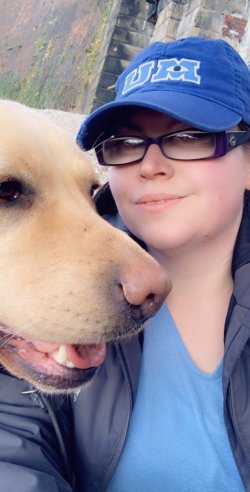 I am registered blind. I was born with cataracts in both eyes and my lenses were removed when I was 3 months old. I have been left with lots of scarring, so I can only see shapes and colours, nothing has a defined shape. I know that some disabled and visually impaired women feel overlooked when it comes to healthcare and cervical screening, so I wanted to share my story and tips to raise awareness of the barriers we face, and to support more women to attend these life-saving tests.

When I received my first invitation for a smear test I was still living at home. I recognised it was a letter for an appointment, so I passed it to my brother and asked him to read it for me. “Smear test…”, he mumbled. All my friends were talking about their smear tests, and everyone had said “It’s dead easy, don’t panic”, but that wasn’t the case for me. My first smear test was horrible, painful, and I left in tears.

"There’s an assumption that you’re not sexually active"

Despite explaining about my visual impairment (and also that I have endometriosis), the nurse didn’t know how best to treat me. She didn’t give me clear directions – where the examination bed was, if there was a chair in the way, where to put my clothes so that no one tripped over them! I had no explanation about what was going on or what was about to happen, and no useful concept of what a speculum looked like. This made me very tense and nervous, and combined with my endometriosis, the exam hurt the entire time. I left swearing I would never go again.

There’s a number of misconceptions about visually impaired women, and I’ve found I’ve been treated differently by doctors and nurses. I’ve even been given dirty looks when I’ve picked up the Pill at a pharmacy. You’re made to feel like you’re less of a human, and like you’re not entitled to sexual healthcare. There’s an assumption that you’re not sexually active, or that you’re a virgin, and that you’ll need a smaller speculum even though we know that all women are different. I feel like I get treated like a child.

"I had my guide dog Bailey with me this time, which really helped"

I had to be convinced by my partner to go for my second smear test, because my first experience was so unpleasant. Thankfully, this one could not have been more different.

I had my guide dog Bailey with me this time, which really helped. She’s my little furry companion, and I’m so used to having her around it made me feel more confident and safe. I told the receptionist in advance that I was bringing her - out of courtesy - but I would have brought her anyway! I was offered a chaperone, but I knew I would prefer my guide dog being there.

I was so nervous that all my questions came tumbling out as soon as I reached the nurse. Fortunately, she was brilliant! She understood all my concerns, and answered all my questions, no matter how silly I thought they were. She made me feel like I wasn’t being daft.

"This nurse let me hold the speculum beforehand, which helped so much"

This nurse let me hold the speculum beforehand, which helped so much. I was able to sit and play with it, work out how it works, understand how big it can open (although the nurse assured me it wouldn’t open the full way) – and she clearly described the whole process for me.

During the test she was really responsive to how I was doing, and if she sensed I was in pain she would stop immediately and take her hands away completely. The test took about half an hour, as it was stop and start, but I felt more in control and left feeling much better than I had last time.

If you’re a visually impaired woman and you’ve been invited for a smear test, there’s a few things I would recommend:

In the future, I’d really like the option to do the test myself, at home. It would let me do it in my own time, and it would get rid of some of the embarrassment for me.

Until then, there’s a few things that doctors and nurses can do to make our appointments easier.

Ultimately I just want healthcare professionals to recognise that blind women are still women. Like all other women we have our own needs, anxieties, and preferences. Assumptions and stigma only make things harder and this shouldn’t be something we have to deal with.

We have more information about cervical screening >