Cervical cancer prevention: The next step

The number of people talking publicly about smear tests in the last week has quite literally blown us away. Our message for Cervical Cancer Prevention Week was ‘attend your smear test, reduce your risk of cervical cancer’ and during the week over 300 stories in the UK media helped us raise vital awareness, a debate in the House of Commons brought the issue to the attention of MPs and thousands of #SmearForSmear selfies were shared by women, men, organisations, celebrities, workplaces and families.

Our reach through the media and social media alone was well over 350 million people.

Please don’t ignore those letters ladies! I did- ended up having a scary stressful time and a LLETZ procedure. Don’t ignore!

If anyone is putting off going because they’re worried then be assured that it’s not scary or painful at all!

It’s okay and completely normal to be scared…talk to your doctor about it, any good doctor will take your concerns seriously and hopefully have some helpful suggestions such as talking you through the process thoroughly before and during and maybe even allowing you to have somebody in the room with you

Women encouraging or even asking their friends to book theirs, and so many comments from women who have been reminded or encouraged to book their test:

Booked mine this morning after avoiding, forgetting and just not bothering

Thanks for the reminder! Haven’t had one for 9 years….

But our work is not over.

Cervical cancer is the most common cancer in women under 35 yet one in three women aged 25-29 are not attending their smear test when invited. Furthermore our latest research found over two thirds of women in this age group don’t think smear tests reduce a woman’s risk of cervical cancer, a third put off attending and over a quarter are too embarrassed to attend. We need to change this.

Launching this week across the UK is a new advertising campaign, funded by the Tampon Tax and designed to tackle some of the barriers to attending a smear test that we identified among this age group through our research. We also want more women to know that support and information about smear tests and cervical cancer is available to them 24 hours a day 7 days a week.

It’s hard hitting and we hope it will generate conversation, make women think and most importantly increase awareness of the role of smear tests in preventing cervical cancer. 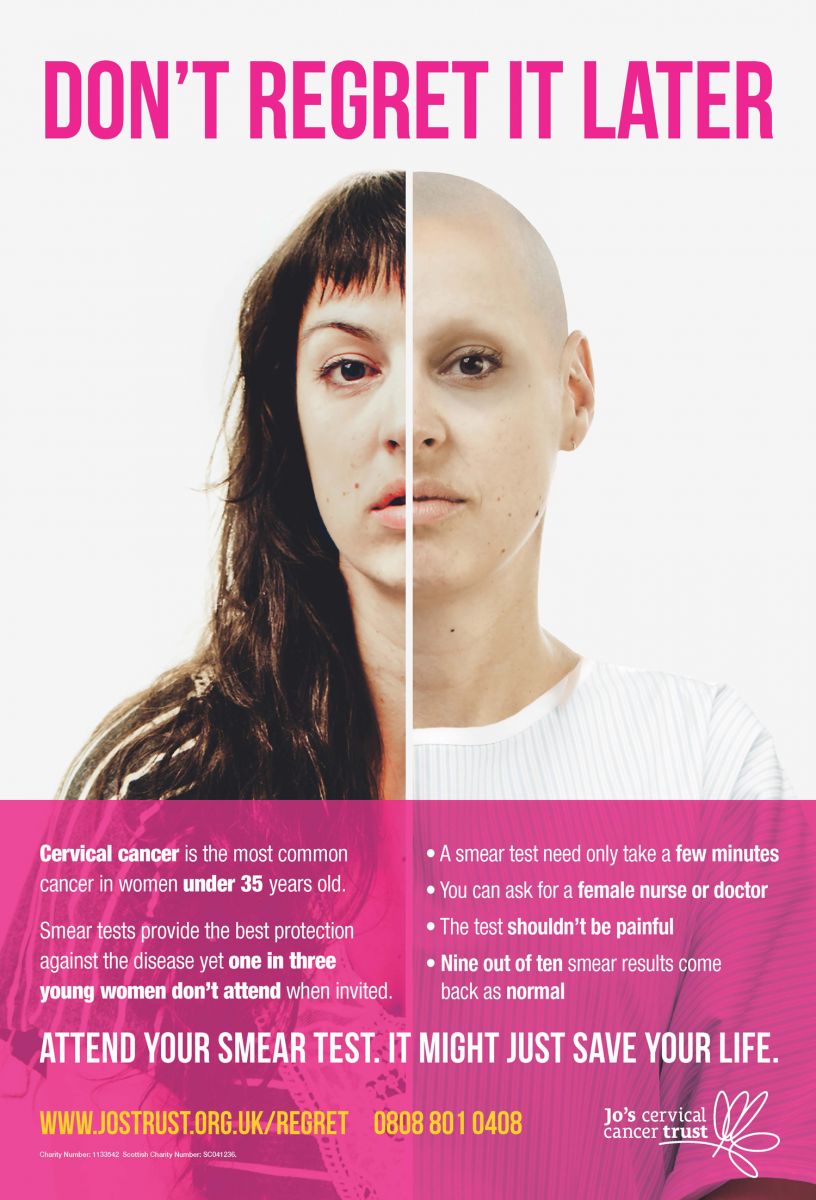 Black Friday: gifts that give back
24/11/2021
"Their lived experience was key to shaping the series of films." Why does co-production matter?
12/11/2021
Behind the headlines: HPV vaccine eliminating cervical cancer
05/11/2021
Behind the headlines: Cervical screening incident in Scotland and what it means
15/09/2021
Bros for Jo's: your stories
18/08/2021
"We need women’s voices and experiences to be centred and amplified": our response to the Women's Health Strategy consultation
23/07/2021