In 2016, I was a full-time police officer. I’m also a mum and at the same time was setting up my own business: a hair and beauty salon which I opened in the March. Needless to say, life was very hectic! It had been about 8 years since I last attended cervical screening (a smear test). My shifts would often change meaning I would have to cancel appointments, and so it was very easy to put it off.

"It was so surreal. I was convinced I was going to die" 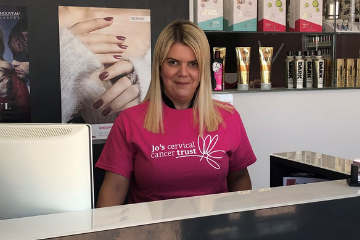 I went along to the doctor for something unrelated in 2017 and, after some prompting, booked in for a screening appointment. I had no idea that this appointment would uncover that I had cervical cancer at the age of 37. It was so surreal. I was convinced I was going to die.

Two months later, I had a radical hysterectomy to treat my cancer, plus some lymph nodes removed. While I feel lucky that it could be treated, this operation means I won’t be able to have any more children. This was the most upsetting thing for me.

Unfortunately, due to scar tissue from my surgery, I’ll never be able to go back to being a police officer. However, I am very blessed to have my lovely salon which I now work in full time. I get to do something creative which I love, as well as making people feel amazing. However, it also means I get to use my place of work to help to do some good for Jo’s.

"I set about raising awareness and fundraising"

After getting the all clear in 2018, I set about raising awareness and fundraising for Jo’s Cervical Cancer Trust, so what I went through is prevented from happening to other women. In my meeting with the consultant and the cancer nurse, it was made clear to me that using Google as a cancer patient was not a good idea. The nurse wrote ‘Jo’s Cervical Cancer Trust’ on a bit of paper and said this site was allowed. In my darkest hours (usually in the middle of the night when everyone else was asleep) I used Jo’s to calm me. 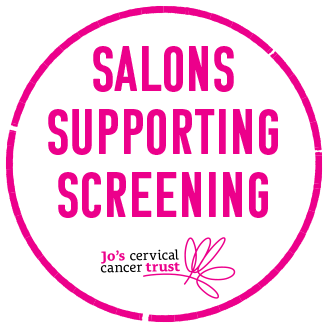 After my diagnosis, I noticed that no one really talks about smear tests or anything related. I found that the salon is the perfect place to start conversations about all things cervical. People have seen me share my story on social media and some ask questions, but we’re also proactive and talk about the taboo subjects with our clients – they are often simple discussions but they can really make the difference in helping someone get answers to their questions or letting them know about Jo’s.

We’ve seen first-hand the positive impact that these discussions can have. I’ve had a number of my clients approach me privately to tell me they attended their screening after we spoke, some have needed further treatment to treat cell changes.

I joined the ‘Salons Supporting Screening’ community to raise awareness as well as vital funds for Jo’s. The charity were literally my life line and raising money for them means that they can be there for more women like me when we really need someone to talk to. Their work to prevent cervical cancers is so important and I’m really pleased my salon can support it.

Where do you start if you’d like to get involved?

If you run a salon, you have everything you need to join Salons Supporting Screening! I think it’s so important to remember that just advertising an event can start a conversation about those taboo subjects, these conversations can save lives so keep talking!

For all our fundraising events we discuss ideas beforehand as a team. If your team are excited about the event then they will encourage your clients to join in. 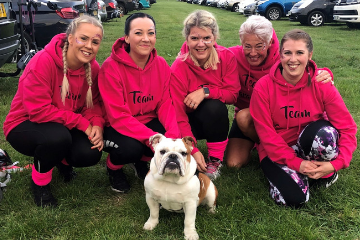 My team are so amazing, and my illness touched them too. I hope I taught them that not even cancer is enough to stop smiling.  In May this year we took part in the Ride the Night cycling 100km. We raised over £4000 for charities including Jo’s. My girls gave up a significant amount of their time training for this event and it was an amazing thing to do which bonded our team together even more.

The Salons Supporting Screening community will open up plenty of these conversations and this is what I am most excited about. We can make a difference.

Feeling inspired? Read all about how you can get involved >