Jo Maxwell died on May 3rd, 1999 from cervical cancer, leaving behind her husband, James and their three young children Thomas, Lucy and Alexander. She was just 40 years of age.

Jo felt that her diagnosis was due to a combination of factors; her admission to having little knowledge about the causes and symptoms of cervical cancer, her reluctance to challenge medical advice as well as inadequate screening and medical advice. 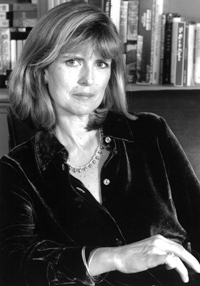 Two years after the birth of her third child, Alexander, in 1992, Jo began to experience bleeding in-between periods. Following consultations with her GP, she was advised to give up coffee.

Some weeks later, the bleeding had continued but was now accompanied with headaches and significant abdominal pain. Jo was referred to an eminent private gynaecologist. He recommended that she came off the contraceptive pill.

There was no appreciable improvement in her condition, so Jo and James concluded that the unnaturally black moods experienced during her periods were latent post-natal symptoms and so did not challenge the medical advice.

In July 1995, at a friend’s insistence, Jo made an appointment with another private gynaecologist, Mr Ian Fergusson, in London. He recommended that Jo have a scan.

On receiving the result, Mr Fergusson explained to Jo and James with great care that she had cervical cancer in primary form.

Further tests revealed that the cancer had spread to her lymph nodes and this meant that there was a risk of the cancer spreading to other parts of the body. On the strength of these results, Jo was then referred on to Dr Raju, St Thomas’ Hospital in London, who performed a radical hysterectomy and lymph node removal two weeks after diagnosis.

Following surgery, Dr Raju recommended a programme of radiotherapy to the pelvic region together with a course of chemotherapy in an attempt to destroy all traces of the cancer.

In July 1997, Jo began to experience severe back pain which she initially thought was due to tearing a muscle whilst carrying suitcases on holiday.

At this stage, Jo endured four months of pain due to inadequate scans. In November 1997, Jo was referred to an Irritable Bowel Specialist who carried out a scan to ascertain the cause of the persistent back pain.

The results were devastating. The cancer had spread to Jo’s lungs and liver. It was also found in her spine and was the cause of her severe back pain.

She was then referred to Dr Peter Harper, a senior oncologist at Guy’s Hospital in London. He confirmed that Jo’s cancer was metastatic. This meant that it had spread from the original cervical site, through the lymph nodes and into her bloodstream and could appear anywhere at any time. He told Jo and James that there was no cure for the disease at this stage and that it was terminal. Jo was told that, at the outside, she would have twelve months.

James spent many hours researching for information on the internet which, at this time, was still in its infancy. He was looking for information, case histories and hope. Information in the UK was minimal and American websites held little more. This search was something that would inspire James in the initial direction of the Jo’s Trust website.

Jo and James celebrated Christmas 1997 in the firm belief that it would be Jo’s last, and that she would not live for many months after. However, in January 1998, James was put in touch with Dr Charles Young, a leading gynaecological cancer specialist in New York.

Reviewing Jo’s medical history, Dr Young suggested an experimental treatment not available then on the NHS. This involved the intravenous administration of Taxol and Carboplatin (combined), given in a mild dose on a weekly basis. Dr Harper agreed to the course of treatment and persuaded BUPA to fund it.

Jo enjoyed a partial remission with almost immediate effect following the administration of the Taxol/Carboplatin combination.

By March of 1998, Jo was able to travel abroad on holiday and, by May, was leading an almost completely normal life with her husband, children and family. This continued until November 1998 when she became allergic to the Carboplatin element of the treatment, leaving the Taxol to work on its own.

By Christmas 1998, the cancer had returned and, during January 1999, Jo had further radiotherapy to her chest and back.

Sadly, Jo’s health deteriorated rapidly between the end of February and April 1999. By then, the cancer had spread to her liver. During these latter stages of her life, she had good palliative care (pain control) from Dr Harper and the nurses at The London Bridge Hospital and The Trinity Hospice at Clapham in South London.

Thankfully, the end came quickly; on Friday April 30th, she was sitting in the garden surrounded by family and friends, but by Saturday evening May 1st, Jo’s courageous battle was nearly at an end. She died peacefully in the early hours of Monday May 3rd of liver failure.

The District Nurses of Tooting and Wandsworth supported and cared for Jo superbly during her final three days of life. She suffered little pain, relatively little discomfort and was lucid almost to the end. It was a beautiful death at home surrounded by her very close family during those precious final days.

You can make a difference

We rely on generous donations, grants and gifts in wills to keep our support services running and campaign for change. Your support enables us to be there for women affected by cervical cancer and raise awareness of how it can be prevented.

"When my mother, Jo, became ill with Cervical Cancer, I was only 7 years old."