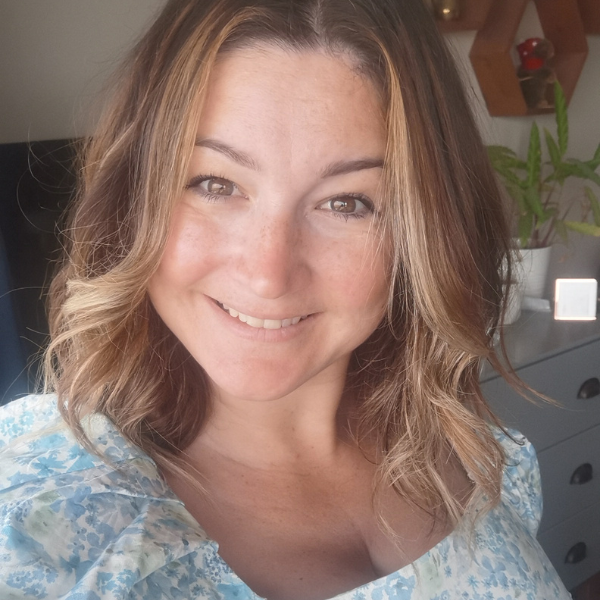 I was diagnosed with HPV and cell changes after a cervical screening. Two months later I went to colposcopy, they examined me and as a result did a punch biopsy. I knew lots of people who had had cell changes that had them removed, so I expected the same and it all to be fine. I was slightly sore for a few days after the biopsy but went straight back to work.

"I didn’t know how to feel but was told it would be OK."

Two weeks later I was asked to come in for an appointment. Here I was told I had cancer. It felt out of the blue and unexpected, and due to COVID I was on my own. I didn’t know how to feel but was told it would be OK. In the following days I had numerous scans and tests and took a few days off work to try and process what I had been told but it didn’t really sink in, and as the outcome was still unknown so I just tried to focus on the best possible outcome.

First I had a LLETZ to try and remove the tumour – my team initially seemed positive it would work. Unfortunately as soon as they completed the procedure they informed me there were still some abnormal cells left and on later inspection the tumour didn’t have clear margins. I was sore for a couple of days again but again went straight back to work.

I had a consultation with a surgeon a few weeks later who said a radical hysterectomy was the preferred route but we talked through the different risks and benefits and opted for a radical trachelectomy to save my fertility as this was really important to me. On the day, when I woke up from my surgery, I could hear different doctors and nurses talking to other patients in recovery about how successful their surgery had been – but no one spoke to me for a while. Later that day I was finally told that they’d found a tiny bit of cancer in one of my lymph nodes, so my surgery had been abandoned after taking 35 nodes, and the trachelectomy part was not even started. This meant my cancer was upgraded from stage 1 to stage 3. An amazing nurse sat with me for almost an hour after they gave me the news as due to COVID I was alone and not allowed any visitors. I asked the surgeon to tell my husband the news, as knew he’d have questions and I’d cry too much.

"I tried to stay positive, and hope was the thing that gave me positivity – mainly hope about having children and having options."

I tried to stay positive, and hope was the thing that gave me positivity – mainly hope about having children and having options. Cancer was almost less important for me and my partner at the start as we had been trying for a family for a while and this is all we could focus on. We did lots of Googling about the fertility impact of different treatments – it wasn’t really something that was raised with us, so it was good to be armed with that information at appointments when options were presented to us. We were told: Google Jo’s, Cancer Research UK and Macmillan, and don’t touch anyone else! This is advice I tell all my friends and family who are being impacted by cancer now too.

We paused the next steps of my treatment to do some IVF. We managed to complete two rounds, I had an MRI in the middle of the two rounds to check the cancer. It was growing, but slowly, so I was allowed to have the second round as the first one hadn’t been very successful.

Two weeks later I started five weeks of chemo, once a week, as well as daily radiotherapy and two rounds of brachytherapy in my sixth week.

Chemo knocked me for six. I was on quite weak drugs in terms of chemo but it made me really tired and sick. I couldn’t eat during the first week, and then the steroids kicked in and couldn’t stop eating! I also got oral thrush, which wasn’t fun.

Radiotherapy is difficult as you need a full bladder before it starts. So getting the timing of this right can be difficult, especially when you’re waiting with a full bladder and they’re running late! Driving to and from appointments was also hard, not knowing if you’d get there without needing to stop on the way.

I had two rounds of brachy in two days as I only a small amount of cancer left to treat. This meant staying overnight with the rods in place which was really hard to sleep as you have to stay on your back and it is pretty uncomfortable and painful at times. I tried to do deep breathing exercises when the rods were removed to help the pain.

I'm now in remission and on HRT. I’m struggling to get the hormone balance right so my mood can be very up and down. One thing I didn’t expect was that the drop in oestrogen going into early onset menopause caused my hair to fall out, luckily it is growing back now I’ve changed my HRT.

When you’re going through cancer, you have to just keep looking towards the next steps and try to stay positive. I did lots of things to keep me calm during treatment such as knitting and painting. I used Instagram to share updates as it was overwhelming at times trying to text everyone back. In the early days and I chose to text friends, rather than calling, so I didn’t have to have conversations with everyone and deal with their reactions.

Sometimes you need to allow yourself to cry and get it out your system, write the day off and have a TV day, but the next day you need to pick yourself back up and stay positive. On the whole I’m doing fine. It’s reassuring having regular appointments with my oncology team – it means anything that comes up or things I’m worried about can get checked out.

"It’s a really supportive community and I feel very hopeful for the future."

I still have days where I get upset about my fertility. It can be hard when friends are pregnant but they know I might be a bit more distanced and that’s OK. It’s less hard when they have children, as I still have hope that I might have that one day. I’m hopeful we will find an amazing surrogate to grow our little frozen embryos. We are currently looking down the independent route for a surrogate – it’s a really supportive community and I feel very hopeful for the future.

Finding out you can’t become pregnant can be very distressing, especially if you want children. Find more information and support >