Annie on the Menopause after cervical cancer 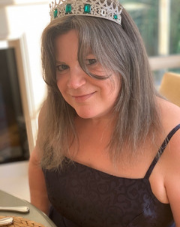 In 2009 I was told I had a 6mm tumour, graded 1B1 cervical cancer, and that I would probably need a radical hysterectomy, and may need radiotherapy or chemotherapy as well.  I should add that I have never missed a smear test, and also have never had any symptoms.

I was in my late thirties and my daughter was only 15 months old. However a hysterectomy was the only option. I was given the choice of having my ovaries removed at the same time which would catapult me into early menopause. This I said yes to straight away. I am blessed with two gorgeous children, and so felt no particular sadness at losing my fertility. To be honest, in those dark days just after the diagnosis, I would happily have given anything just to stay alive and see my children grow up.

In the following weeks I had MRI scans and CT scans, and was booked in for a radical hysterectomy, ovary removal and lymph node removal on 14 May 2009.  The operation was successful, and the subsequent tests on my lymph nodes revealed no further cancer cells, so I didn't need any further treatment.

I hit menopause immediately and was on HRT before I left the hospital. It took a couple of attempts to find the one that suited me best and I would say that it's important for anyone going onto HRT to be assertive with their doctor so that they find the right one, particularly as this can affect your sex life a lot.

I also had a lot of swelling and puffiness in my legs following removal of the lymph nodes and for around two years I didn't have a lot of sensation in the inside of my thighs. But this is back to normal now.

I feel incredibly lucky that the cancer was picked up so quickly, the cancer was an adenosquamous cancer, which is a fast-growing one, and had it not been discovered when it was, the results could have been very different.

"I am on HRT which suits me very well"

In 2014, almost five years down the road, cancer had only affected my life in a positive way. I am on HRT which suits me very well, I am healthier and fitter than I was before the diagnosis, and I have a 'can-do' mentality - you have to take what you are given and run with it! I consider myself to have escaped very lightly from my brush with cancer, and as some of the girls who I've met through JCCT will attest, it could have been so much worse.  My children even call my hysterectomy scar my 'smile'.

Jo's Cervical Cancer Trust was a beacon in the darkness. The girls I met through the charity's services pulled me out of many a dark pit of despair, made me feel so grateful for my family, and my life, and on many occasions, had me in fits of laughter! I cannot thank them enough.

There's always a niggling worry in the back of my mind about the cancer returning, but I tend to think if that was my brush with cancer, then I got off lightly. I'm a glass half full person and have a positive outlook and so I just crack on with things. I can't live my life in fear.

In early 2019 the ten-year anniversary of my diagnosis and radical hysterectomy passed. In the last five years, I have come to realise that life is too short. Life is too short to pass up the chance to be happy. Life is too short not to put yourself first. Eat the chocolate. Drink the gin. Dance in the rain! Don’t sweat the small stuff. I will be 50 next year, and I am so blessed to have my health, and my children. Be grateful, and be thankful.

"The worst thing wasn’t the biopsy, it was the waiting for results"
Read Laura's story
Last Updated:
19 Jul 2019