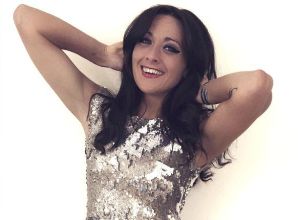 In 2009 I was a healthy 24 year old, enjoying playing hockey, riding and I was engaged to my boyfriend; life was good. However, I started to get really bloated, had irregular bleeding and then also got a bad smelly discharge. Off I went to my GP and after doing some tests and the issue still not being resolved after a couple of months, I was referred to the gynaecology unit in the Bristol Royal Infirmary.

The registrar in hospital sent me for further tests and scans including an MRI and two weeks later, I was told the devastating news that I had stage 1b cervical cancer. I was just shocked; here I was sitting in front of this doctor being told I had cancer, I didn't even know what cervical cancer was, knew nobody that ever had it and all I could think of was how I was going to lose my hair and just die.

Fortunately, that didn't happen. I was lucky that it was caught at an early stage. Although initially a hysterectomy was discussed it was decided that a cone biopsy and a pelvic lymph node removal would be sufficient to get rid of the cancer. Surgery itself wasn't too bad although the whole experience was the most petrifying experience of my life. I also have to admit I didn’t deal with it very well, my family and friends were all very supportive but I just joked about it all and laughed how I would have no hair on my wedding day; I guess everyone deals differently with such life changing experiences.

After surgery I waited and waited for my results and unfortunately I was told that the margins weren't clear. Off I went for another round of scans and then a Lletz procedure which finally got rid of the remaining cancerous cells.

I was told that they had removed quite a substantial part of my cervix and that my chances of falling pregnant and carrying to full term would be minimal. I was devastated but then again, I had beaten cancer, was alive and well.

From this point on I attended three monthly check ups for five years and only recently I was put on yearly check ups. Because they had removed so much of my cervix and it's very hard to get to I also don't go for regular smear test like everyone else but to colposcopy where it’s easier to have a direct look at everything. At first I was really worried that the cancer would return as I still get bloated and due to surgery scars and also having endometriosis I get irregular bleeding; I just thought if I've had it once, what will stop me from getting it again? Slowly but surely these thoughts got less and less, I occasionally still get worried but with every check up I get the confirmation that all is well helps.

I first heard about Jo's from my CNS in hospital and at the time of treatment I went on their website and posted my story on the forum which was incredibly helpful. Even though my family were very supportive, they did not know how it felt to be diagnosed and go through treatment, whereas the women on the Jo's forum did.

I got married in 2011 after I had finished surgery and all the cancer had been removed and me and my husband directly started trying for a baby. At first it didn't look like it was going to happen; I unfortunately miscarried three times at a very early stage of the pregnancy. Eventually in 2012 I fell pregnant again and this time everything looked much better. I got to 12 weeks with everything looking healthy and they put a stitch in my cervix at this point which helped. However, my cervix still started to look quite weak so I was put on bed rest for seven months. It was horrible, I only got up to shower and go to hospital appointments, for the rest of the day I sat bored in my bed with nothing to occupy my mind except to worry about my unborn child.

At 38 weeks the doctors took my stitch out but nothing happened. At 40 weeks and nine days my waters had broken and I had been in labour for two days but still, my cervix would not give way. As it turned out, because of the surgery for the cancer and my endometriosis there was some scarring which was holding everything together. They gave me an epidural, opened up the cervix and then I gave birth to my beautiful baby girl naturally; finally I could welcome Arabella into this world, I was beyond happy.

Since giving birth I have got back into working out and healthy eating and applied to the Women's Health 'The Body' competition where I'm now among the five finalists. I'm so incredibly proud and love that through the competition I'm also able to raise awareness of cervical cancer and show other women that you can beat this. I’m living proof cervical cancer is not the end and that you can recover.