Charlotte on pregnancy after cervical cancer

Charlotte's fertility-saving treatment plan meant that she was able to have a baby naturally after chemotherapy for cervical cancer. She discusses her experience of treatment, cold caps and pregnancy after getting the all-clear. 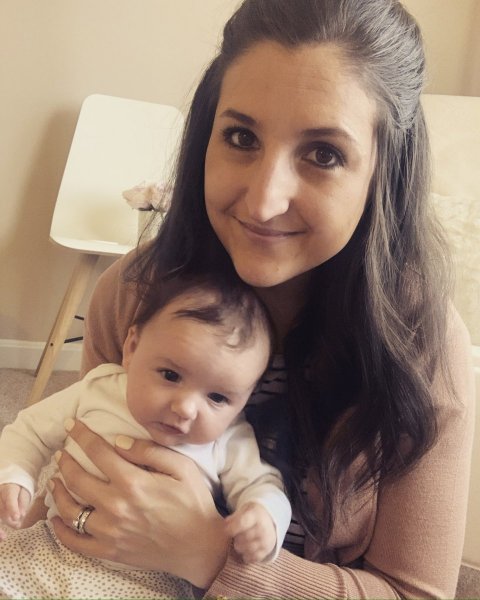 I was diagnosed with cervical cancer in October 2017 at the age of 28. I am from the UK but have been living in the US for the past 3 years having relocated for my husband’s work. I attended my first smear test in the UK at aged 25 and then again in the US aged 28. After this smear test, I tested positive for high-risk HPV and had CIN3 high-grade cervical cell changes. I was sent for colposcopy and had a biopsy but my doctors were unable to get clear margins so I was sent for a cold knife cone biopsy which is a small surgical procedure. I was then diagnosed with Stage 1B1 cervical cancer having previously shown no symptoms or cell changes.

The doctors were surprised by my results given that my smear test 3 years previously had been clear and because it’s generally a slow-progressing cancer. HPV was not routinely screened for by the NHS when I had my first smear test and even though my cancer was still considered early stage, who knows if it could have been found even earlier had HPV testing been in place back then.

"Preserving my fertility was one of my doctor's top priorities"

I truly believe that I was in the “right place at the right time” when my cancer was diagnosed. At my first oncology appointment, my doctor had just returned from a medical conference about fertility-sparing cancer treatment and I was her first patient. She understood that I really wanted to have a family someday and preserving my fertility was one of her top priorities. This meant that my treatment was less aggressive than it may otherwise have been.

My tumour was considered medically small and was towards the end of my cervix, meaning it was further away from my other gynecological organs. My oncologist suggested that this meant we could do smaller doses of chemotherapy more regularly. I would have these doses every week for nine weeks, followed by another biopsy surgery to see if the cancer was completely gone. In April 2018, six months on from diagnosis I was finally declared cancer free!!

During treatment, I would schedule my chemo sessions on a Friday which gave me the weekend to recover. While I didn’t get too sick from the chemo, it did make me extremely tired so I wasn’t able to do a lot of the things I was used to doing at weekends. Prior to treatment I was usually very active and it was difficult to force myself to slow down and give my body the rest it needed. I wanted to continue working, if I could, to help keep my mind focused, and I was very lucky to have an employer who allowed me the flexibility to work from home and take as much time off as I needed.

I used cold caps while I was going through chemo, a type of cryotherapy treatment which reduces blood flow to the hair follicles to try to minimize hair loss. In some regards I actually found this worse than the chemo itself – the caps had to be kept at a temperature of -32°C / - 25°F (which was achieved by rotating them in a cooler of dry ice) and had to be worn for about 8 hours in total during every session. I can only describe the pain as extreme brain freeze, but after the first 30 minutes it became much more bearable and thankfully I didn’t lose any hair at the end of it.

Of course, cancer doesn’t just affect the person going through it, but also those closest to them and the mental and emotional aspects are probably not discussed as much as they should be. My husband was an absolute rock throughout my entire cancer journey, always very positive and there to lift my spirits in the low times. However, I know it was very hard for him too, especially living in a different country away from family and friends and not having his own support network. Thanks to modern technology and a strong Wi-Fi connection we were able to spend a lot of time video-calling people back home and I was also very lucky that my mum and best friend were able to fly out for some of my chemo sessions, which was incredible for me to see them, but it also gave my husband a little respite, allowing him to recharge his batteries (mentally and physically).

I set up a dedicated Instagram account (@the.small.c) not only as a way to keep my family and friends up to date with how my treatment was going, but also as a way of connecting with other people from the cancer community. I relied so much on this new community, as well as online resources such as Jo’s Cervical Cancer Trust, especially in the early days of my diagnoses when I had so many questions and fears.

When I was initially diagnosed, one of my biggest fears was not being able to have children (naturally), or that if I did become pregnant, I would have a much higher risk of miscarriage or premature birth. In April 2019, almost exactly one year after being declared cancer free we were so excited to find out we were expecting a baby. Luckily, I had a relatively uncomplicated pregnancy (apart from some really bad morning sickness) but I was still considered high-risk so I was closely monitored during each trimester. On 16th December 2019, we welcomed our beautiful baby girl into the world and have been completely in awe of and in love with her ever since!

I know not everybody has a happy ending to their cancer story, especially when it comes to fertility, but I hope my story gives hope to those who have been newly diagnosed that it doesn't automatically mean they will never be able to have children (naturally) and that there are alternative, less aggressive treatment plans that may work for them. I want my story to show that something positive can come from having cancer.

Reading stories about how Australia could become the first country to completely eradicate cervical cancer through the HPV vaccination program is extremely encouraging. And how the UK now offers the HPV vaccine to all children aged 12-14, boys as well as girls, is very promising and shows how much progress is being made. I will definitely be getting my daughter vaccinated when she is older.

If you need support, remember our services are here for you.

"I chose to have a trachelectomy because I want to have children in the future"
Read Stephanie's story
Last Updated:
18 Feb 2020