Dot on cervical cancer treatment and side effects 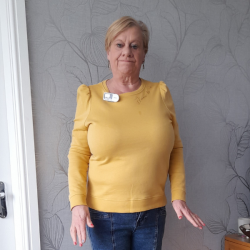 Dot was diagnosed with cervical cancer when she was 54, after having some abnormal bleeding. She was treated with chemotherapy and, after being all clear for five years, discusses some of the side effects of her treatment.

I was always quite scared of smear tests and would ignore the letters – I used to hide them. I was a heavy smoker and had been for 25 years, and I had a bad feeling that this would catch up with me, which made me more nervous about smear tests.

"I had finished my periods two years before, so I knew something was not right"

In 2015, when I was 54 I found I was getting light headed and very tired. I ignored it for a while but one morning I was getting ready for work and I had a bleed, which scared me. I had finished my periods two years before, so I knew something was not right.

I went to my doctor and they referred me for a biopsy. On the day I went for my results, my best friend came with me, I did not want my family with me in case it was bad news.

When the doctor called me in, I saw a Macmillan nurse with him and I knew. After that, I don’t really remember what the doctor said, it’s a blur. All I was thinking about is how I was going to tell my family.

I brought my friend along with me to tell my husband and my family. My husband has been wonderfully supportive throughout the whole thing, but I still felt I had to be brave for him and my family. I wanted to protect him. With my friend, I could cry if I needed to.

Between scans, I went back into hospital as I had a really big bleed and needed a transfusion. My doctor was so stern with me and told me that I absolutely had to give up smoking. He was really blunt, but I needed to hear it. I never smoked again. I told myself that the doctors were doing everything for me, so I have to do something too.

It was a whirlwind and I was terrified at every test I had. I didn’t really understand much of what they told me about the treatment. At my first chemotherapy appointment, I cried my eyes out. I couldn’t understand why I was here with all these sick people – I should be at work! But the nurses and doctors were incredible, and the same friend came with me to everything. It was scary, but in a strange way I got used to going to the hospital.

I did get through it, although waiting for the results to tell me I’m clear was the worst part. My mental health was poor. I kept convincing myself that it would be bad news. I would be at my doctors’ every other day thinking that the cancer was back at the slightest thing.

During this period, I found the Jo’s Forum incredibly helpful because others had had the same thing and could tell me if I needed to be worried or not. It taught me so much. At some points I’d say I was addicted to the Forum! Reading as much as I possibly could gave me hope and gave me confidence, as well as knowledge that the hospital doesn’t.

"I still get frightened, but I have more knowledge now which helps me to calm down"

I am five years all clear and I feel very, very lucky. Unfortunately, the long term side effects have been tough. I struggle with neuropathy in my both of my feet, as my nerves were damaged by my treatment. It began when I started to fall over after my treatment, and assumed it was because of my shoes! However, this got more and more frequent over the following few years. I saw my doctor about it who sent me for some tests. I can’t walk too far now which meant that I’ve taken early retirement, and I now use a walking stick to help stop me falling. I get really bad pins and needles, which can be really disabling. It was a big change to my life, becoming dependent on others.

I still volunteer in my local hospital and Macmillan hub, I’ve really wanted to give something back after my experience, and I have always wanted to help people. When you’ve been through it yourself, you really understand. We can just be there for people who need information about health, finance, or just people who are frightened and need to talk to. I still get frightened, but I have more knowledge now which helps me to calm down.

I’m sharing my story because I want to help just one person avoid going through what I went through. I wish I’d endured just two minutes of discomfort, which might have stopped me going through this.

If you've had a cervical cancer diagnosis, we are here to support you. Find out how we can help >

The only symptom I had was abnormal bleeding. I would urge everyone not to ignore something that isn’t right. You know your body
Read Charlene's story
Last Updated:
21 May 2021