I was diagnosed with 1b1 cervical cancer the day 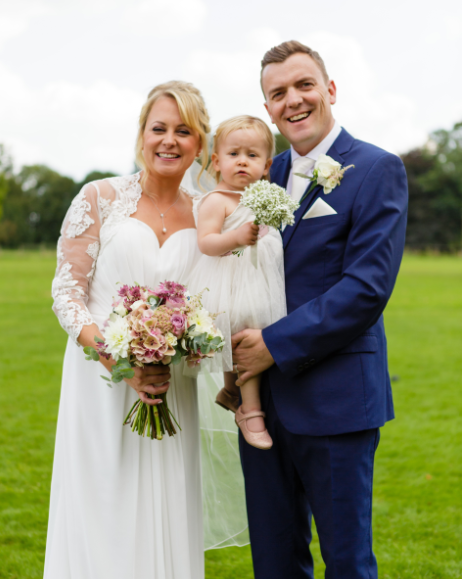 before my 31st birthday. At the time I was single and didn't have any children and hadn't even thought about having a family. I was living a perfectly normal, happy life, working full time as a TV producer and living in my own home with my two dogs. Never in my worst nightmares could I have imagined that I could have cancer.

"My whole world came to a bit of a stand still"

The diagnosis was a complete shock as I had never missed a cervical screening test and had no symptoms. It turns out I was just one of the unlucky percentage whose cancer didn't show up on a smear test. My whole world came to a bit of a stand still. I was petrified about what this would mean and it was the not knowing and waiting for results that was the worst part.

I had further investigations throughout November and December including 2 MRI scans, a PET scan and a biospy. Christmas was a very stressful time, full of fear, emotion and worry. My family put on a brave face, but while my nieces and nephews happily unwrapped their presents I couldn't help thinking about whether I would be able to have kids or even if I would be around to see next Christmas. Having kids was not something that I had ever put much thought into until then.

"I met a guy two weeks before my first surgery"

It's not like me to be depressed or down, so I did my best to shake off my worry and try and gain something positive from the situation. I realised that life would go on and that what was happening to me was totally out of my hands, so worrying wouldn't help.

To keep my mind off everything that was going on I joined an online dating site. I didn't know what the future had in store for me. I didn't know if I needed chemotehrapy, operations or may potentially lose my fertility and I wasn't ready to admit to myself that I was ill or act like I was ill. I felt fine, I was in the prime of my life and probably the best shape I had ever been in. I wanted to have fun while I still felt fit and well and forget about the big C. I had had enough of everyone worring about me and wanted to meet some new people who didn't know I was ill.

I met a guy two weeks before my first surgery, which was great for taking my mind off everything. I told him about what I was going through and thought he would run a mile, but it was the complete opposite. He was very supportive and stood by me every step of the way.

In January 2013 I was refered to Guildford hospital. I had my lymphnodes removed via laproscopic surgery on the 29th Jan. These came back clear with no signs of cancer so six weeks later on the 14th of March I had a radical trachelectomy to remove my cervix, but to preserve my fertility.

Both operations went very well and I was out of hospital both times within 24 hours and on day three was up and about. Ten days after surgery I felt fine and was able to go out and about on short walks with the dogs again, six weeks on and I started jogging again and 10 weeks on I ran the 10k Race for Life and raised £750 for Cancer Research.

I went back to work in June 2013 and my life is back to normal. I'm still having regular check ups and am still not out of the woods yet. I have lymphatic fluid around my operation sites which has shown up on my one year check up MRI, so I am having that investigated at the minute. As for other side effects, there are none that are really worth noting, I have a slightly numb thigh - possibly due to some damage when removing my lymph nodes - and four tiny scars on my belly from the operation.

"If one positive has come from being diagnosed with cervical cancer, it was finding love"

Going through the surgery with my partner and being in the early stages of our relationship actually made us even stronger. If one positive has come from being diagnosed with cervical cancer, it was finding love. We got married in 2017 and have had two children together. Lily was born in 2016 and Charlie was born in 2019. I am very lucky that I was able to conceive naturally and have my children via caesarean section.

Reading the Jo's forum helped me to put things into perspective. There are so many strong women out there who have been on a much tougher journey than I have, and reading stories from people who have experienced everything that I was going through really helped. Sometimes your friends and family can't help you as they don't have the experience or advice to offer, whereas Jo's does.

For any ladies going through cervical cancer, my mantra was always: 'ride the storm, life goes on'. Things will get better, you can get through this. When it rains look for rainbows and when it's dark look for stars.

"I would feel so ill after chemo but I had a great support network"
Read Stephanie's story
Last Updated:
15 Apr 2019