Lauren on having a radical trachelectomy 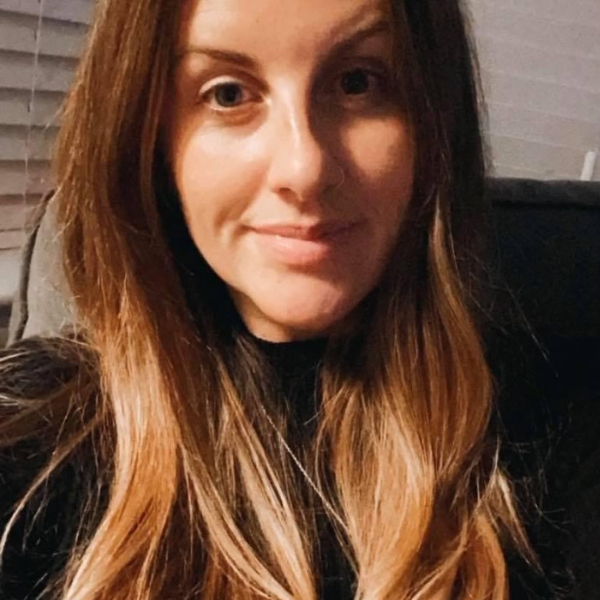 Lauren shares her story of having cervical cancer which was treated with a radical trachelectomy. She discusses her mental and physical recovery, as well as going on to have her daughter.

In 2015 on my 28th birthday, I go for my smear test (my second one). I know what you're thinking, who the hell goes for a smear test on their birthday? Apparently I do! I was very careful about having it done, Jade Goody’s legacy had a big impact on me as I was growing up so I wanted it done as soon as I could.

In June, I got a letter explaining to me that my smear test had detected high grade cell changes and that I need to go to hospital and have a colposcopy. My first reaction was panic, but I remembered my mum had gone through the same thing. The more I spoke about it, the more I found that it was quite common.

"I woke up with the biggest knot in my stomach"

The day of the appointment arrived and I woke up with the biggest knot in my stomach, terrified of several things: not knowing what the appointment is going to entail, having a total stranger rooting around downstairs, and the unknown outcome. David (my partner) and my mum came with me. I wanted to spare David the trauma of seeing my cervix on a 15 inch screen so I left him in the waiting room, taking my mum in with me.

My mum asked if the doctor has seen more extreme cases of abnormal cells and she responds “yes, this is very mild compared to other cases I have seen". Well, you can imagine my delight in hearing this. They take a biopsy, the appointment is over in 10 minutes and I practically skip out of the examination room.

A few weeks later, I got a call from a private number. On the other end of the phone is a doctor explaining that I need to come down to the hospital right away. Not telling me the reason why, I naturally panicked, refusing to come down unless he tells me right there and then. I wanted to be prepared. He said “I'm sorry to inform you but we've detected cancer".

"It was amazing not to need chemotherapy, but it was all very overwhelming"

Cancer? How the hell can I have cancer? I'm only 28, I’ve just bought my first house. I’m getting married in less than a year! My eyes fill with tears and my head starts to spin. How am I meant to tell my family this news, am I going to die? What happens next is still a bit of a blur. In the panic I rang David and my mum to tell them the news and make our way to the hospital. 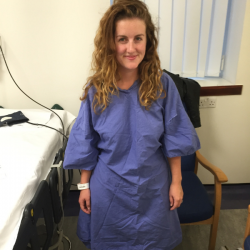 When we arrive, the doctor explains what they found in the biopsy. I needed further investigation, and it was staged at stage 1b. This meant it could be treated with surgery, a radical trachelectomy and pelvic lymph node removal. It was amazing not to need chemotherapy, but it was all very overwhelming. There was so much information to take in, and every appointment I had meant a long trip on the train to London.

The operation went well, but unfortunately they found a secondary tumour, and the margins weren’t clear so in January 2016 I had a smaller secondary operation to make sure they got it all.

Recovery was tough. I was really uncomfortable after the surgeries, and was on a lot of medication. I pushed myself to recover, going back to work after six weeks. They didn’t force me to go back, but I was really bored! There are certain physical things to get used to after having a trachelectomy, and a shortened vagina, for example I can’t use tampons and find them really uncomfortable.

Mentally, things were even harder. Waiting for the results after that was terrifying, far worse than being told something bad. My diagnosis also had a huge impact on mine and my husbands’ sex life, and it’s still something I struggle with now. The HPV transmission aspect is still something that sticks in my head, even though I have been with him for 14 years now. I’m glad we had been together for so long when it happened, but it was still tough.

I still struggle mentally now, especially with the fear around annual check-ups, the worry that I might need more treatment. I find that distractions are good, so working helps, walking the dog helps. In the last couple of months I have really started taking care of myself and my immune system, so exercise has become really helpful to clear my head. When I was diagnosed, I was really stressed out and smoked and had a worse diet, which could be why I wasn’t able to fight the HPV off.

"My daughter was born at 25 weeks" 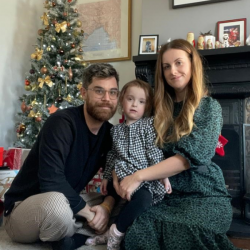 A year after my surgery, I got pregnant with my daughter. I was so relieved that the cancer was finished with, and that I was still able to have a baby thanks to the trachelectomy. But I felt I wanted to keep the two things separate, so I didn’t look into it very much before getting pregnant, and perhaps went in a bit blindly.

My daughter was born at 25 weeks, which was scary – she weighed only 660g when she was born and I didn’t even know babies could be born this early. But she’s really healthy now and she’s amazing! I wish I’d taken it a bit more seriously at the time and found more out, but we are very lucky to have her. I would like others who have had a trachelectomy to know that it might be difficult, but not to give up hope that you can have a family.

"Sometimes, it’s just about keeping your head above the water"

I get a lot of support and I love to share things about smear tests as much as I can. It’s uncomfortable, yes, but I thought I was healthy and I was young, so don’t be complacent. I sometimes hear from men that it’s ‘too much information’ but I’ll keep being honest and open, if it encourages someone else to get checked out.

People tell me I’m so strong and now I look back and think how did I get through that?! But you’ve got no other choice. Sometimes, it’s just about keeping your head above the water. I have good days and good months, but I haven’t had a good, worry-free year yet. 5 years is a big sigh of relief, when you are told that you have just as much chance of the cancer coming back as the next person does of getting cancer. I still worry about tiny things that are probably nothing.  Every year that goes past, you get less panicky, but it’ll always be there to an extent.

If you are looking for support for or information about cervical cancer, talk to us >

I would say that the toughest and most worrying part was waiting for my results after the operation
Read Joanne's story
Last Updated:
12 Apr 2021