Maria on coping with treatment side effects

After experiencing irregular bleeding, Maria was diagnosed with cervical cancer and went on to have a hysterectomy, chemotherapy, radiotherapy and brachytherapy. She shares she's coped with the side effects of treatment and gone on to share her story in the media.

In August 2010 I started to notice some symptoms and decided to go to my GP. I was having irregular bleeding and cramps which I never normally suffered from. I went for a smear test and was called back for a colposcopy appointment. Following further investigations in October I was told I had stage 1b/2a cervical cancer at 25 years old. 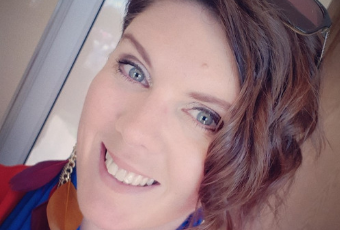 Thankfully the cancer hadn't spread, so it was recommended I had a hysterectomy, but I was to keep my ovaries although the surgeon was moving them higher as it was still not clear if I would need more treatment.

It was all a bit mad, to say the least, and hard to comprehend. At the time my son was 8 years old and whilst he knew Mum had been poorly and needed an operation, we never said the word 'cancer'. It was only after I had recovered and he was a bit older, we told him it had been cancer.

Facing a loss of fertility at such a young age was pretty tough and we discussed freezing eggs but I decided against that as it would have delayed my treatment. One of my doctors gave me the best piece of advice; that I had to think of the child I already had and not the children I could possibly have in the future. I had to think of my son who was here with me, and healthy.

Unfortunately because of the position of the tumour the doctors weren't satisfied they had enough clear margins and recommended chemotherapy, radiotherapy and brachytherapy 'just to be on the safe side'. I was upset about this news, but I had to remember that if treatment was going to make me better for the rest of my life, then great. My 26th birthday was one to remember as it was the day I started my radiotherapy and chemotherapy. I also got to add to my tattoo collection as i had tiny dots tattooed on my thighs and pubic bone ready to line up the lasers of the radiotherapy machine. The daily radiotherapy was ok and over fairly quickly. The weekly chemotherapy was harder as I was sat hooked up to a drip for 5-6 hours. The brachytherapy was the most difficult to deal with as I had to travel further to hospital and it was more invasive.

I didn't suffer from many immediate side effects, I didn't vomit or lose my hair but I was exhausted. I had little energy as I was up early every morning to travel to the hospital and went to bed around teatime most evenings. There are always positives though as I made two friends who I call my chemo buddies and I am still in touch with.

The first side effect I have had to deal with was starting the menopause. Unfortunately the radiotherapy killed off my ovaries. I suffer badly with hot flushes whilst at the same time always having very cold hands and feet. My mum and I compare our symptoms and HRT patches or 'hot flush stickers', as my son likes to call them. Over the last few years I have suffered long time term side effects of the treatment most notably Radiotherapy Enteritis, I have to be very mindful of what I eat and drink.

I now keep fit by running, swimming and attending exercise classes. I still get tired, I can sometimes sleep up to 12 hours a night quite easily but my immune system is slowly recovering.

I am now 8 years all clear of cervical cancer and living life to the full! My involvement with Jo's Cervical Cancer Trust continues as I am a media volunteer and fundraiser. I have appeared on BBC Breakfast Live, local and national news programmes, numerous radio interviews and represented Jo's Cervical Cancer Trust at the Welsh Parliament, One Voice for Wales Campaign and as a volunteer on the Be Cervix Savvy Roadshow. My fundraising exploits including a 12,000 foot skydive, an abseil down a castle tower and raising awareness by appearing in the local press and generally spreading the word about Jo's Trust!

With your support we can be there for more people affected by cervical cancer. Please donate now >

"After a number of appointments, scans and internal examinations I was diagonsed with stage 2b cervical cancer"
Read Lisa's story
Last Updated:
17 Jul 2019