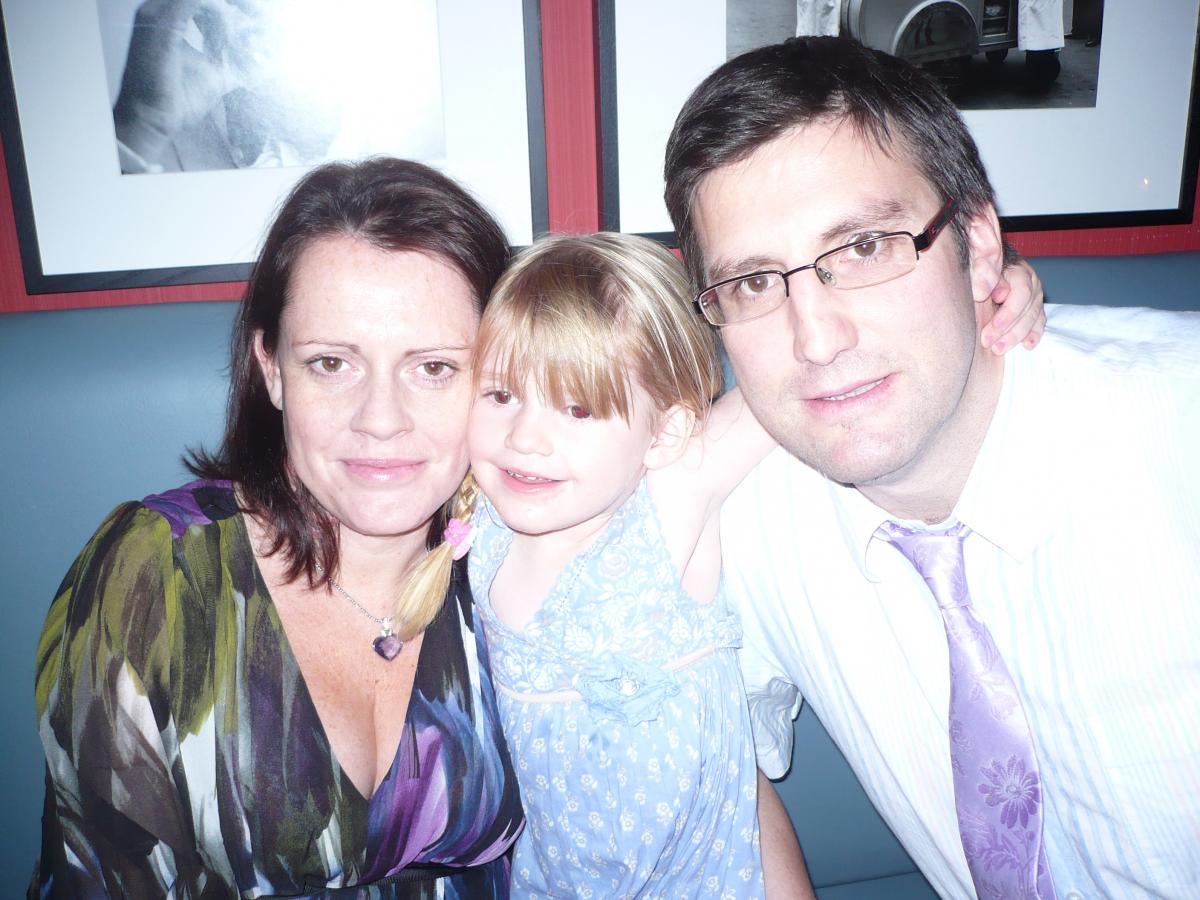 "On 26 November 2013 I lost my wife, and mother to our six year old daughter Emma, to cervical cancer.

Everything started in May 2013 when my wife Angela went into hospital for an operation following her fifth miscarriage. During this operation the surgeon found a mass on her cervix which we were told about at a follow up appointment.

Angela was sent for a further examination at which point I was called to the hospital to be with Angela. The consultant sat us down in a room and told us it was cervical cancer, a rare and fast growing type called adenocarcinoma which is unlikely to show up on a regular smear test, which had always come back clear for Angela. The diagnosis came as a total shock to us and one of my first thoughts was that I needed to make sure she received the best possible treatment with the best surgeons. We had already suffered so much heartbreak with the five miscarriages Angela had. It's terrible to lose a child, but you somehow cope. However, for your loved one to be told she has cancer is devastating and for me it was incredibly hard to imagine how she felt. As a partner I wanted to stay strong and positive for her.

Angela was initially diagnosed with stage 2 and was told she needed radiotherapy, chemotherapy and brachytherapy but then they discovered that it was stage 3. As far as we were concerned we always thought she had a 50/50 chance and remained as positive as possible always believing she would make it.

Angela started her treatment and my work was amazing about it; I was able to be with her every step of the way, whether it was being with her during treatments or attending consultant's appointments. Treatment was tough but Angela was doing well. We actually had a holiday booked in August which I almost cancelled but the doctor told us to go saying it would be exactly what Angela needed after the treatment. In September Angela started another round of therapy. She had some more scans which revealed that the tumour had indeed shrunk which was great news. However, the scans also showed that she had blood clots in the veins of the pelvis and needed treatment for this.

Unfortunately further scans in October showed extension of the blood clots in the main vein draining her legs and pelvis. Again, I wanted to make sure Angela received the best treatment possible, it was my way of trying to help her. She was seen by a vascular surgeon who arranged for her immediate transfer to Queen Alexandra Hospital for treatment of the extensive clotting and they subsequently transferred her to Southampton General Hospital where some clots were removed. Despite starting her on clot-busting drugs, she continued to have problems. As she was about to be released from hospital she started having excruciating pain in her kidneys and she was unable to go home.. She then also started to have trouble breathing and after another round of scans we were told she had blood clots in her lungs. Doctors took me aside and told me that they had no idea how else to help her, they had tried everything to stop the clotting but nothing was really helping. That moment was the first time I realised Angela was actually going to die from this, that there was no hope left.

Angela stayed in hospital and the whole family visited her in hospital for her niece's first birthday. She had a lovely day seeing her niece turn one. Three days later, on Tuesday 26 November 2013, she peacefully died in her sleep.

Angela's diagnosis and death was an incredibly difficult time - I would have swapped places with her in a heartbeat – it was so difficult watching your partner suffer.  I would have done anything to help her. Even though I knew that I had done everything possible, I still felt like I hadn’t done enough.

Our daughter Emma has been incredible. We did tell her mummy was ill right from the beginning and we took her everywhere with us, even to intensive care. She would put on gloves with the doctors and look after mummy. Even now she is incredible and wants to help in every way she can. She'd like to run the kids version of the Great South Run and raise funds for Jo's.

Angela had discovered Jo's during her journey. She used the Jo's forum quite a lot and found comfort in reading and talking to other ladies who were going through the same thing. Jo's is also great for partners, sometimes you just want that bit of extra information and the amount of info on their website is great and it's incredible to see all these survivors keeping in touch and sharing their story. It gives you hope and support."

We also have a private forum for partners, for more information click here