Shirley on losing her daughter Helen 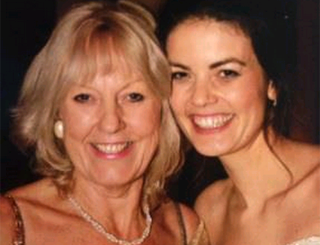 In 2006 my 28-year-old daughter Helen started to have very heavy periods, so she went to her female GP, who was very dismissive and said something to her along the lines of 'welcome to the real world.' After this experience Helen didn't go back for several months but then she also started to bleed during intercourse so she went back to her doctor, who this time gave her an internal examination, but still found no worrying signs.

A couple of months later her regular smear test was due and this also came back 'clear'. However because her symptoms were still persisting Helen was referred to a gynaecologist and he discovered what he thought was a polyp, but saw no urgency to have it removed, therefore surgery was scheduled for four months later. From the time of her first symptoms to her operation 15-18 months had already passed. Sadly the result of this operation was that stage 2b cervical cancer was diagnosed. She was more devastated by being told she would never be able to bear her own children, therefore she was allowed a window of one month IVF in order to freeze embryos if a surrogate mother could be found, which was very successful.

We were all full of hope that she would beat the cancer - she had always been so healthy and strong - and after receiving radiotherapy and chemotherapy the doctors told us she had responded well. Fortunately this chemotherapy meant she didn't lose her beautiful, long, thick hair. Because all seemed well, Helen and her boyfriend of ten years, Richard, married in December 2007 as previously planned, and they enjoyed a short honeymoon in Lapland.

However on their return Helen went to her new doctor (they had subsequently moved house) because she thought she had strained a muscle in her stomach by happily driving dog sleighs, but a CT scan was organised for Christmas Eve and on 3 January 2008 she was told she now had a tumour in her pelvis the size of a grapefruit. This second diagnosis was absolutely devastating. Things got worse when we were told the surgeon who the hospital wanted to perform the operation had just gone on a two week skiing holiday. While not wanting to show my daughter just how worried I was, I did try to get another surgeon to operate on her earlier - after all it was a fast growing tumour and the surgeon might return from holiday with a broken wrist or other injury.

However I couldn't convince the hospital, so Helen didn't have the tumour removed until mid-February.  She also had to have aggressive chemotherapy from April till July, this time very sadly losing all her hair, but we were all hopeful of a full recovery and viewed this as a precautionary thing as the surgeon was sure the operation in February had been a success.

The most difficult thing as a mother is that because your child is over 18 years old, and as Richard was on record as her next of kin, the doctors are legally bound to only tell you details with your child's consent. Not wanting to alarm her by allowing her to realise just how worried I was by asking for her consent, I had to rely on only the information that Helen and Richard wanted me to know. Also I knew just how much Richard had wanted to start his own family before her diagnosis, so I worried terribly that he wouldn't feel able to support her. However thankfully this was unfounded and he was really supportive to her constantly. It must have been so hard for him at only 30 years old - far too early and hard to be widowed at such a young age and I cherish the fact that we are still in touch with him.

Sadly on 1 September 2008 Helen was told that a tumour had grown back through the scar tissue and that a second tumour had invaded her bladder. She would now be under the care of an urologist for possible treatment to install two stomas. However on this same day he advised that he was not prepared to carry out the operation as it would only make her last few weeks harder to bear.

This was the point that we were all told Helen would have just a few months left to live. It was like living in a complete nightmare for all of us who loved her. Constantly throughout the previous two years I had longed for it to be me suffering and not Helen, for I had had my life, had had my two gorgeous children who had grown up into wonderful caring adults - it was so unfair for all this pain to happen to my daughter, but all she asked was that we treat her normally, and stay bright and cheery like always when with her. So I tried to stay so strong in front of her and never broke down or cried when with her. But now, five years after her death, I worry that she might have felt I coped too well, caring less - I wish I had told her just how devastated I was and that I wasn't sure I could live without her.  Sometimes I think to lose a child through an accident might have been easier, there's no need to curb every conversation and think through every word spoken, but I know however it happens, it is never, ever easy. It still surprises me how cheerful she remained.

She didn't go onto the Jo's Cervical Cancer Trust site very often, preferring not to know what other people were going through. However I did, spending many hours trying to understand fully what was happening to my daughter's body. I also spent long hours trying to find hospitals worldwide which might be researching treatments to help Helen, but sadly found none, which is why I am so supportive of the Debbie Fund working in conjunction with the UCL, trying to discover new treatments to cure this terrible disease.

Helen unbelievably sadly lost her battle early in the morning of 13 November 2008, at the Windsor Hospice, Richard and I by her side.

I still miss my daughter as much as I did five years ago. Her brother recently said that he misses her even more now the older he gets. He was just 21 months older and they were always very close. I think it's also very hard to lose a child. I've met lots of people who lost someone very close, like a parent or spouse. One morning after Helen had died I went to a coffee morning at the Hospice and there amongst 30 odd mourning relatives I was the only one who had lost a 'child' - two ladies even burst into tears when they knew, saying they couldn't imagine life without their daughters with them. I feel that as a partner you are able to move on to some extent, and Helen's husband after over three years following her death found a new girlfriend and they now have a five month old baby. Helen would be so pleased for him and happy about it, as we, her family are, even though we long for it to have been Helen having his baby. We wish them all well. As a mother or parent though, I feel like it's harder to ever be completely happy again and I hope telling my story is helping other mourning parents and shows them that they are not alone. If I can advise women of any age I'd say do have every smear test you are offered - if over 65 years old, do ask for regular smears too - but if the result comes back 'clear' however symptoms persist, do be pro-active with your GP and insist on further exploration.

Whenever I'm sad and thinking of Helen, I can feel her in front of me saying '"pull yourself together, Mum, and smile..." and that's what I try to do, every day. And always I am grateful for the 31 years two months of having my beautiful, clever, loving, funny, feisty, strong-willed daughter in my life to hug.

"Because my sister couldn't get online I became her connection to information and friendship."
Read Kevin's story
Last Updated:
21 Jul 2014