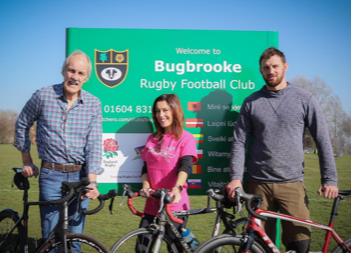 Jo Painter, a mother of two from Wootton, was diagnosed with cervical cancer in 2018 when she was just 38. Her husband Neil has put together a 50-strong group of friends who will cycle a mammoth 206 miles from Northampton to Exeter, to raise money for Jo’s Cervical Cancer Trust.

Neil played for Bugbrooke Rugby Club from the age of 15, as did many of the cyclists taking part. Neil and Jo’s two sons, 8 and 5, now play for the Bugbrooke children’s ‘mini’ team and Neil coaches the under-8s team. The peloton, made up of ex-Bugbrooke Rugby Club players and their family and friends, initially aimed to raise £20,000 through their 3-day cycle. They have already beaten this target and are now aiming to raise £25,000.

The Premiership Rugby teams Northampton Saints and Exeter Chiefs are supporting the cycle. The Saints displayed Jo’s Cervical Cancer Trust’s logo on their match day shirts against Bath in March.

Jo’s Cervical Cancer Trust supported Jo through her devastating diagnosis of stage 2b cervical cancer, and her gruelling 6 weeks of chemoradiotherapy treatment. The treatment caused many side effects, as well as periods of depression and anxiety.

Jo spoke about her experience with cervical cancer:

“I was up-to-date with my smear tests, all of which had been negative so I’ll never forget hearing those words from my consultant – “you have cervical cancer”. Being physically fit and relatively young, it came as a huge shock to all my family & friends. Breaking the news to my husband and my mum was one of the hardest things I’d ever had to do.

The strength I got came from my two young sons. They were my world and still so young, so I was desperate to protect them. I had to stay positive and strong and I knew this dreadful disease was not going to take me away from them. It wasn’t an option.”

"Finding out that Jo had cancer was horrendous. However, with amazing treatment and support, Jo has come out the other end fighting fit. Her journey continues with the after-effects of chemoradiation but Jo considers herself 'one of the lucky ones'. Going through this with Jo spurred me on to do something as a way of helping others in our situation. The charity works to prevent more families from going through what we have, so we want to get there as fast as we can.

Jo's Cervical Cancer Trust has helped Jo in so many ways, from coping with her diagnosis, to going through treatment and beyond. She was able to meet others, both online and in person, who have experienced cervical cancer and can understand her fears. It really helped her to come to terms with what was happening. She also had access to lots of valuable information when she needed answers to put her mind at ease.”

“We’re so grateful to Neil, Jo and everybody in the team of cyclists for taking on this enormous challenge for us! I’m so pleased that we could be there for Jo when she needed us. The money raised will enable us to reach more and more women affected by cervical cancer and their loved ones, so no one has to go through this alone or uninformed. A huge thank you from everyone at Jo’s!”

The end of the cycle will coincide with the Exeter vs Saints match on the 18 May. There will be 300 Nor2Exe cycle supporters at the match, celebrating their achievement and the Exeter Chiefs are running a coaching session for the Bugbrooke Mini team on the morning of the match.

If you’d like to donate or read more, this is the team’s page (or Google ‘Nor2Exe’): https://www.justgiving.com/companyteams/nor2exe