I was diagnosed with cervical cancer when I was pregnant for the second time. I had sailed through a trouble free pregnancy with my first daughter, Jordan, but I have to admit, the minute I fell pregnant with Aaron, I felt very ill. I was sick all the time, I was in pain, I couldn't eat, and nothing could convince me that this was a normal pregnancy. In comparison when I was expecting Jordan, my partner and I backpacked to India!

"Next day they told me. I had cervical cancer" 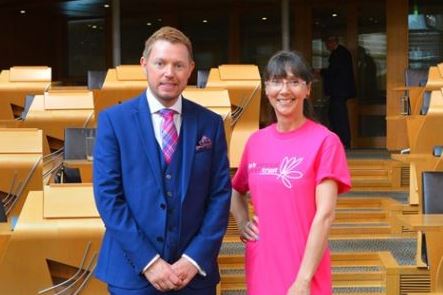 Treatment at that time could have damaged my baby and I didn't want to face that, so I kept my fears secret. When I was eight months pregnant, I was back at hospital for the umpteenth time after bleeding. This time the doctor said she was concerned because I'd been in so often, that she'd like to examine me further. She then told me there was a growth the size of a tennis ball in my cervix. I had a biopsy and had to stay in hospital for the results. That night was awful. I lay awake wondering what was going to happen to us.

Next day they told me. I had cervical cancer, and because of the position of my tumour, I wouldn't be able to deliver my baby normally. I was rushed into theatre for an emergency c-sect, baby Aaron was perfect, however when I was in the recovery ward I started bleeding severely and had to have a hysterectomy. When I eventually did go home I was really worried about all the time I had been apart from my girls, I hadn't had a proper chance to bond with my newborn. A bed was made up for me in the living room and I began my chemotherapy and radiation treatment 4 weeks later. Sadly despite an intensive course of treatments the cancer was still there and I had to go through a 24 hour intensive course. It was ghastly, to be honest I think it was the nurses and doctors who kept me sane. In the end the tumour shrunk but along with the tumour, other organs had also shrunk and I needed more surgeries to repair the damage.

I had ignored the little voice in my head which told me I had cancer. Like many people, I didn't want to hear that. I've since had to cope with more operations, hysterectomy, early menopause, skin grafts, scars, reconstructive surgery, arthritis, osteoporosis and am continuing ongoing surgeries but with my family by my side.

Today though, I have two beautiful girls and a future.

"Raising awareness of cervical cancer is so important to me"

Raising awareness of cervical cancer is so important to me and I try and take every opportunity to talk to the media, fundraise or attend events on behalf of Jo’s Cervical Cancer Trust. My daughters often join me and they are as dedicated and passionate about cervical cancer as I am. They have a fantastic time at events knowing how much we could be helping to save someone's life.

I took part in the official launch of the HPV Immunisation, organise the Ayrshire Steps for Jo’s event, have told my story to the media, held pamper days, craft fairs and much more. There’s always something new to get involved with and I have had some fantastic opportunities including being invited by my local MP Katy Clark to an International Women's Day event, meeting the Prime Minister to discuss new cervical screening awareness policies and more recently I was invited to the opening ceremony at the Scottish Parliament as a Local Hero and supporter of Jo’s Cervical Cancer Trust providing an amazing opportunity to discuss and share my experiences.

Since battling cervical cancer I have definitely had a new outlook on life and have made sure to smile every day, spend wholesome quality time with my family and friends, and volunteer my time to Jo’s whenever I possibly can to prevent other women from going through what I have and to ensure that anyone who does has access to the best information, support and care.

Huge thanks to Patricia Gibson for tabling the Early Day Motion on Cervical Cancer Awareness, Jo's Cervical Cancer Trust and our recent Steps for Jo's Event at Eglinton Park.

Have you been affected by cervical cancer? Becoming a media volunteer is one way you can share your story to raise awareness >