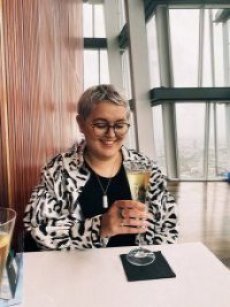 Alice was diagnosed with cervical cancer when she was 29, but unfortunately was diagnosed with a recurrence shortly after her first round of treatment. She's now 31, and shared her experience of pelvic exenteration surgery and Avastin.

In December 2018, I was diagnosed with stage 1b2 cervical cancer. I had a hysterectomy to treat it, but was also given 5 weeks of radiotherapy and then brachytherapy as a preventative measure to keep it from coming back. 2 months after my treatment finished, I started having pain in my bum-cheek area. I went for a scan in October, which came back showing that there was a 7cm tumour. I was so shocked that it had come back, and really scared – especially as it had come back so quickly after treatment, and that the tumour was so large.

I was referred to the Royal Marsden to see if I could have the pelvic exenteration, but was told no, because of the large size of the tumour and the fact that it was so close to my sciatic nerve. Instead, I would have chemotherapy and see how that worked. In Dec 2019, I started the chemotherapy cocktail of carboplatin, taxol and Avastin which I had every 3 weeks until April 2020. I found chemotherapy difficult but thankfully I had had lots of tips and tricks on managing side effects from a friend on the Jo’s Forum. I reacted extremely well to the chemotherapy and found that my tumour shrank to 2cm, and away from the sciatic nerve.

I was sent back to the Marsden in May and was thinking I would probably have radiotherapy again, but I spoke to a surgeon who told me that the pelvic exenteration was now possible! This was obviously really good news. However, there is no guarantee that it will be successful, so I still had to weigh up whether or not I would have the operation. It was difficult to decide as you’d be left with bags for life, but it could also not work. I spoke to my surgeon a lot, as well as people on the Jo’s forum as hearing their experiences was really useful. My surgeon said that if we leave it, it will definitely get worse and I could have ended up with nephrostomy bags as my ability to wee was already being affected.

I decided to have the surgery. As the cancer was growing into my bladder area, they would definitely remove that, but weren’t sure whether or not they would remove my bowel. I had a few more appointments and a laporoscopic surgery to check that there was no more cancer anywhere else, which there wasn’t. On the 5th August I had the anterior pelvic exenteration. They were able to keep my bowel, and now I have a urostomy bag, which I am coping quite well with all things considered.

The surgery went well for me. I was in hospital for about 2 weeks afterwards and thankfully had no major side effects, apart from my wound coming open and needing a PICO dressing on it. My surgeons kept telling me that I didn’t look like I should be in hospital! After a few days, the doctors will make you get up and walk about every day so you get used to walking. However, I am still quite tired from everything and would not say I am back to normal. I’ve not been back to work since December – I am able to be fairly active but am still taking things easy. I do things around the house and try to go for a walk at lunchtimes. I make and sell earrings on the side so I’ll do this too if I get bored! With coronavirus I don’t tend to go out that much as I don’t want to put myself at risk.

Speaking to other people who have been through similar things has been the most helpful thing by far for me, I have a group that I speak to daily. This has also helped us with our care as we share knowledge about treatments. If you know that something exists but hasn’t been suggested to you, don’t be afraid to be vocal and advocate for yourself with the doctors.

If you have an advanced cervical cancer diagnosis, you can join our private Advanced section of our online forum >

"More of a concern to me was the mental recovery after surgery, which was completely unknown"
Lissa's story
Last Updated:
09 Nov 2020