Lissa on the emotional impact of cervical cancer

Cervical cancer is always a life-changing diagnosis and the impact of coronavirus has added more pressures. Lissa shares her experience of having a hysterectomy to treat cervical cancer and recovering from it during the coronavirus pandemic. If you are struggling with any of the same issues, know that we are here to support you. 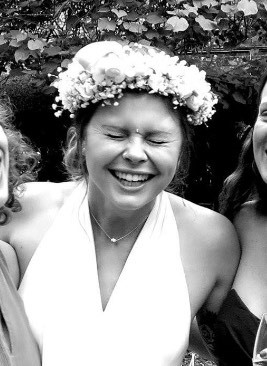 I was diagnosed with cervical cancer on the 12th March 2020, when I was 36. I had my first abnormal smear test result back in January 2017, which showed high-grade cell changes, and I went on to have a LLETZ procedure. I developed an infection after the procedure, which led to a lot of bleeding over a few weeks and caused me to misjudge my period, which led to me getting pregnant. After my first son, Huxley, was born, I had another smear test which came back with borderline cell changes, so I went for a colposcopy and some polyps were removed. I was informed at that point that they were benign. I then became pregnant again - just eleven months after giving birth to my first son – and went on to have a beautiful pregnancy and birth of my second boy, Jago. I kept postponing meetings at the hospital during my pregnancy, as I thought they wouldn't be able to check anything. So I was shocked to discover at a consultation five months after my second birth that, actually, they did have some cause for concern.

I had another colposcopy and was told immediately that "the good news was all looked well". I was surprised to receive a letter a couple of weeks later saying that my surgical procedure was now booked. "Surgical procedure"?! I had to call the hospital to find out what procedure and for what?! I was eventually told that I needed another LLETZ, as my smear results had come back showing that I had high grade cell changes again. I had this under general anaesthetic because I had had pain during my last colposcopy. When I woke up, the consultant said all had gone well.

A couple of weeks later I was told to come back to the hospital for another consultation, and I can honestly say that I didn't think this was out of the ordinary. At the consultation the doctor began to ask me about my desire to have children again... This is when I started to realise something wasn't right. So, when I was told that a tumour had in fact been removed during my last LLETZ which was cancerous, I was calm at first. Then, a couple of minutes later, while I sat there by myself holding my baby, I began to cry as it slowly sank in. I had cancer. In the space of two years, I had just had two wonderful pregnancies - and no symptoms. How could this be? They couldn't confirm if they had removed all of the tumour or not. And now I had to decide if I wanted to have a trachelectomy or a hysterectomy - a choice of being able to have more pregnancies but with complications, or no more pregnancies with less risk and complications. I had two weeks to make my choice. I think I always knew deep down I would have a hysterectomy, and this is what I ended up choosing.

Looking back over my 7-week journey so far (from the point of diagnosis to the day I am writing this), the first few days immediately after diagnosis were the hardest. I was convinced that I had only a few more months to live and that my baby boys were going to live a life without a mother. I felt like I was on the top of a rollercoaster, about to go over the big dip, but wasn't strapped in. It was like there was a TV on in the background which was playing the narrative of my diagnosis over and over again. I could pretend that I was fully engrossed in conversation, but all I could hear was "cancer... I'm going to die".

"The world around me was going crazy; as too, was the world inside my head."

At the exact same time as my world was beginning to fall apart, things were really beginning to kick off around COVID-19. People were talking about schools closing and panic buying. The shops and cafes were still open at this point, but over the weekend public gatherings were beginning to get cancelled. There was tangible fear in the air. The world around me was going crazy; as too, was the world inside my head. By the end of the following week, the country was on lockdown and all unessential travel was banned.  My mum had flown over from the Isle of Man and a friend I was going to see were now both stuck here with me. I was happy about that though, and it was where they both wanted to be too, helping me.

There was much discussion around my recovery and there was an emphasis on the physical recovery immediately post-surgery. I knew that practical stuff would be handled between us all. However, more of a concern to me was the mental recovery after surgery, which was completely unknown. I had no cancer or hysterectomy toolbox to reach into. For me, I had to weave a story together that made me feel that somehow this was my life's journey and somehow I would be a better person at the end of it.

I was able to reach out to wellbeing therapists and practitioners to help "hold" me in a safe space between diagnosis and surgery. I knew that I wanted to wake up from the surgery and not feel a loss. I wanted to wake up and feel that the womb was somehow still there. Not in a denial kind of way, but in an energetic way - which I know may be difficult for some people to understand, but I got there and felt connected to it. I woke up from surgery and I felt OK. Yes the drugs had something to do with that, but I didn't feel as much sorrow as I had expected.

Three weeks went by where I felt relatively positive. I threw myself into projects that I could do on my computer - which included making and editing a film of my cancer journey, setting up a business, researching my ancestors, building up my pregnancy Facebook support group and completing online courses. Into week three post-op, things began to change.

I began to feel a bit more physically mobile, which meant that my sitting on the computer so much jarred with my desire to get up and about. I was really worried about how COVID 19 was going to affect my family's income. My partner was now furloughed and my maternity allowance had just stopped at the same time that I was written off work for 12 weeks. Plus, the new job that I was about to begin now looked like it wouldn't start again until at the earliest September! It looked like I wouldn't have any kind of financial support - other than maybe PIP and the possibility of a grant from Mummy's Star [a charity for people affected by cancer during pregnancy]. 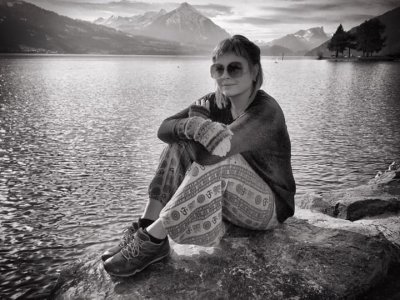 I was stressed with worrying about that and wanting to put balls into motion, but I was also desperate to spend time with my children. So, one day, I decided to just STOP. Stop all the thinking and worrying about the future, and focus on me, now. I guessed that would allow myself to start focusing on the trauma of the previous weeks and start getting in touch with the emotional pain of losing my womb at only 36 when I very much had wanted another child. When you are suffering, you need people around you that understand what you are going through and give you the time and space to go a bit dark... to withdraw a little; to get moody a little (or a lot!).  Sadly, those around me were also suffering too because of COVID-19; death, solitude, chaos, uncertainty was affecting everyone in deep and myriad ways.

We were all eggs boiling in a pan, all cracking at the same time. A blow out was needed between us all...and it came. It took a week for things to settle down before I received my first hug. The mental crisis finally felt like it was subsiding. However, COVID-19 is still in full swing.

COVID-19 is making recovery so much more difficult. I haven't been able to see any of my friends. My oldest boy hasn't been going to nursery or playgroup which would normally give him some energy release. My mum has been separated from her elderly husband while helping me out, putting stress on her. On top of that, her mother, my grandmother, is in a care home with a diagnosed case of COVID-19 and my gran at 89 is now suffering from a temperature. I can't go out for a coffee or go to the cinema. We were all trapped together with little escape. However, the whole experience of cancer and COVID-19 - happening concurrently - has brought a huge opportunity for me to reflect upon my life and my relationships.

"I need to be here, now, for myself and my children"

I know that I personally want to give more "presence" to my children. Being at home with them doesn't always mean I'm 100% with them. For example, if I'm checking my phone, then I'm somewhere else. I had a flirt with death... but I'm still alive. So I need to be here, now, for myself and my children. So my diagnosis has been a heavy burden to carry, and will probably always be there. Sometimes that TV in the background may turn on again, some days it will be louder and maybe some days it will be turned completely off. And who knows about COVID 19.

With regards to cervical cancer specifically, I would strongly suggest that as well as the mental and physical recovery, the spiritual is considered too. The hospitals will focus on the physical recovery and touch on the mental health. The charities will emphasise the mental recovery.  But little is offered around the spiritual - or existential - aspects of what happens to someone when they face their own death or, as a woman, managing the grief of no longer being able to become pregnant. Normally, these transitions happen over a period of years and, with each experience, a level of wisdom is gained. But with cervical cancer, the change is often immediate. In my case, I feel I am in an in-between state - a young woman who only just became a mother, but also a woman with no uterus who can no longer bear children. This, I believe, needs spiritual guidance, that currently isn't very accessible to the general public.

This helps you to break things down in your life in a way that can be simplified and worked with. Otherwise, everything blurs into one messy chaos in your head.

If you’re facing the same challenges as Lissa, we’re here for you, as are some other organisations that may be able to help.

For support with mental health, talk to Mind >

For specialised mental health support after a cancer diagnosis, speak to  Maggie's >

"I would like to offer encouragement to other sufferers – side effects really do seem to improve over time."
Read Joanna's story
Last Updated:
21 May 2020