Cassandra on cervical cancer and how to talk to cancer patients

Cassandra was diagnosed with cervical cancer when she was 35. She discusses dealing with two rounds of treatment, the side effects, and her top tips for talking to somebody who has cancer. 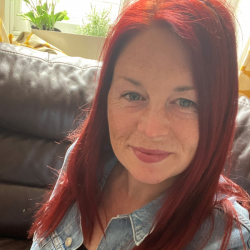 In May 2015 I was feeling a little run down and had two occasions of spotting in between my periods. I was really clockwork with my periods so it was a bit bizarre. I thought it would be really embarrassing to tell the doctor and thought about cancelling. But I just thought I’d go.

The doctor took a swab, and there was a gush of blood. She put me as a two-week referral. One week later, I had a letter to tell me that they had found abnormal cells. I’d had this before, but they always went back to normal. This time they wanted to do a loop procedure and get rid of them. I was ecstatic that it wasn’t cancer.

"It was amazing to find a place where everybody understood"

I spent a lot of time on the Jo’s Forum before the procedure which was great. I didn’t really tell anybody else what was happening, so it was amazing to find a place where everybody understood, and you didn’t have to explain the medical things.

Within 4 days I went in for the treatment. At hospital, I started to feel concerned as my appointment went on a lot longer than expected. I could see on the screen that there was a lot of blood. I had 6 punch biopsies taken.

A few weeks later, I was playing with my sons when a letter arrived. It was an appointment for the next day with a doctor I didn’t know. I naturally looked up the name and found he was a specialist in gynaecological cancers. I knew what was coming. I had no idea how far, how long or what the next step was, but I knew I was in for a fight.

At the appointment, the nurse had tears in her eyes as she approached me. I knew it was only a few minutes after that life would change for my whole family. I thought of my 3 kids – a baby, a toddler and a teenager doing her GCSEs.

The next three weeks were scans, letters, appointments and blood tests. I was told I needed a full hysterectomy and 18 lymph nodes removed but nothing else as the tumour seemed contained. The operation was hard, all I wanted was to get rid of it but I wasn’t ready in my head to not have children again. I was 35, so my team wanted to move my ovaries up to avoid me going straight into the menopause.

They thought it had all gone really well, although I was very uncomfortable when I went home, as I was catheterised and having to inject blood thinners. 10 days later, I got a call from my oncologist, asking if I was able to talk. The cancer had spread to a lymph node.

"Every day I was scared that it could be spreading further"

I did not know if I had anything left in the tank to take this on. I was fed up, scared and had to tell my family once again that I needed further treatment. I never drank or smoked, I’ve run a marathon in the past, I was really fit and healthy – I didn’t understand. I had to wait five weeks as I was too weak to go through any more treatment, yet every day I was scared that it could be spreading further.

I had chemotherapy and radiotherapy at the same time for six weeks, then brachytherapy, and it was brutal. It targeted my entire pelvis, made me very sick and affected my bowel badly. I pushed myself and did things like the school run, to show my family I was okay, but behind the door I was trying so hard just to keep going. I remember at one point my middle son coming in and asking me a homework question whilst I was throwing up in the toilet. It was actually quite funny because it made it all seem normal. Kids are great at just being themselves. The side effects were awful, but it was okay in my head as long as I survived. In February 2016, I was told I was in remission. It was amazing but also terrifying. 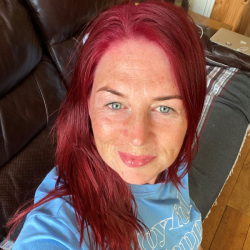 "Not everybody knows how to talk to someone who has cancer"

When you’re diagnosed, you see the difference between those who understand cancer and those who don’t. I had people speaking to me as though they thought I was about to die! It was a horrible feeling and I realised that not everybody knows how to talk to someone who has cancer.

Having been on both sides of it, I think the most important thing to remember is that we don’t lose our hearing. I’ve been on the receiving end of whispers at the school gate, or just having people avoiding me altogether. Speak openly. If someone has the guts to tell you that they have cancer, it’s OK to be upset, but have that conversation person-to-person. Don’t look away or avoid them; that is so much more hurtful than saying the ‘wrong thing’.

If you are scared or worried, don’t hide it. If you feel rubbish about it, and you feel awful for the patient, you can say that. It’s also OK to ask questions like ‘what’s going to happen next’? If you don’t know what to say, just say that you are here for them. Be proactive, go round to their house if you can, or just give them a knock on the door. Just try to treat people normally.

There is a stigma with cervical cancer that it is a sexually transmitted disease, or it might even be just because it’s ‘down there’. People don’t always talk about cervical cancer in the same way that you might talk about breast cancer, for example. Some people don’t even know that you can get cancer on your cervix.

My husband booked me a spa day when I went into in remission. I had to explain to the staff that I couldn’t have certain things because of the cancer treatment I’d had. The woman replied, ‘oh you poor thing, what kind of cancer?’ When I replied ‘cervical’, she said ‘cervical – where did you get that from?’ I got straight off the massage table and walked out in tears. Education is key, as is hearing from younger people who have had cervical cancer.

"I went from being a mum who could have another child, to going through the menopause while my mates had babies"

I went into the menopause too, and at 35 that was awful. I put on weight, and for the first three months the symptoms like hair growth and hot flushes were really intense. This impacted me socially a lot – going out for a glass of wine became an embarrassing ordeal, as my face would go red and I would start to sweat. It can be really disruptive and it’s not how you expect to look at this age. Now it’s OK, but mentally it’s hard with the mood swings and I can have a shorter temper.

In my treatment, everything that could be taken, was. I went from being a mum who could have another child, to going through the menopause while my mates had babies. Baby showers were hard, I didn’t want to take the limelight but found it hard to be around them.

A few years on, my bladder has improved, but I’m still quite intolerant to certain things because of my bowel damage. I don’t eat bread or dairy anymore as they cause really bad cramps and urgency.

The year I was diagnosed, my daughter had the HPV vaccine. It made me feel much safer that she’s had this and her risk of going through this is much lower. If I could stop anyone from going through what I did, I would. Lots of people have said to me that they don’t want to have their smear test for whatever reason, especially during Covid, not wanting to bother their GP. But if I had left it even a few more months, I might have been in a really different position.

I’m definitely a different person, I’m still fun and we do crazy things as a family, but emotionally and mentally I’m still muddling through. For me, there came a point where you will tell your friends or family that you’re having a bad day, and they will say something like “but it was years ago”. But they didn’t go through it. The side effects can be physically and mentally challenging, but I don’t want people to see me as an old lady, and I want to show people what I can still do. Every year you get past it’s another year to be more confident.

There is a tomorrow, that might still be a bit cloudy and rainy, but the day after might be better, and eventually the sun comes out and you can enjoy the warmth of it and the feeling that you’ve made it through one of the hardest times in your life.

Are you looking for support? If you've had a cervical cancer diagnosis and want to talk or ask questions, here's how we can help >

I am five years all clear and I feel very, very lucky. Unfortunately, the long term side effects have been tough
Read Dot's story
Last Updated:
04 Jun 2021