Mark on supporting his wife Lisa 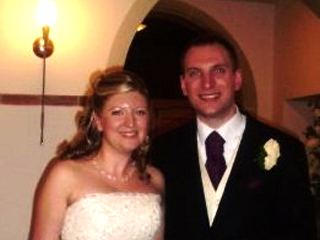 My wife Lisa was 28 when she was diagnosed with cervical cancer. She had been for a routine smear test and within a week had received a call back to go for a colposcopy. Just before Christmas 2011 we received the most shocking news - she had cervical cancer.

"I know it's a cliché, but you always assume it will never happen to you"

Unfortunately I wasn't with her when she got the news - I received a text on my mobile whilst at work while Lisa was still in the hospital. Everything stopped in that moment. I know it's a cliché, but you always assume it will never happen to you and it wasn't something I'd even considered us having to face at our age, especially as there were no symptoms. My immediate thoughts were simply for Lisa. It's one thing having things happen to you, but when it's a loved one it is incredibly hard as you feel you have no control over what is going on.

Lisa's cancer was caught early (stage 1b1), however our local hospital was only able to offer a hysterectomy. As we were hoping to have a family, we researched other treatments that would enable Lisa to still have children. Our consultant referred her to the Royal Marsden in London who would be able to carry out a procedure called a trachelectomy. Lisa underwent pelvic lymph node dissection, a cone biospy and then the trachelectomy. She was given the all clear in April 2012.

I knew a little bit about the disease before the diagosis but did some research on the internet so I could understand the procedures and support Lisa as much as possible. Lisa did her own research so she was fully aware of everything, but it was still important that I understood exactly what we were dealing with.

During the treatment I made sure I was there for her including accompanying her to procedures and hospital appointments. I did have to take time off work, some of which was compassionate leave, others I took as holiday. The main thing for me was that she didn't face it alone.

It's difficult to admit but there were some very tough emotional times for me throughout that period. It was a case of being strong for Lisa but behind closed doors and away from her, when I could remove myself from the situation, it became very difficult at times when the reality of what we were going through sank in. It's not something you can discuss with many people unless they have been through similar experiences. It is helpful to offload and fortunately we are a very open couple and can discuss things together.

Lisa was incredibly strong through the whole experience as well as quite matter of fact about it. It wasn't a case of 'why this is happening to me?' but rather 'let me know what needs doing and we'll do it'. I was however conscious that she might be putting on a brave face and I know the physical and mental pain must have been difficult to cope with at times, and indeed we still talk a lot about it now. It was hard seeing her suffer and I think I was naturally mindful of what she might be feeling and thinking.

"There will always be this extra bond between us"

Lisa has just gone from having check-ups at four month intervals to every six months, is fit and well and we are still hoping to be able to have children one day. Whilst our relationship hasn't changed, there will always be this extra bond between us from getting through this experience together.

If your partner has received a cervical cancer diagnosis, we have information to support you >

"I had never struggled with my mental health before"
Read Nicole's story
Last Updated:
07 Jul 2014