Nicole on cervical cancer and coronavirus

Nicole was diagnosed with cervical cancer when she was 28, in October 2019. She began treatment in January 2020 and, as she was recovering, the UK went into lockdown due to coronavirus. meaning Nicole has spent around 6 months socially distancing. 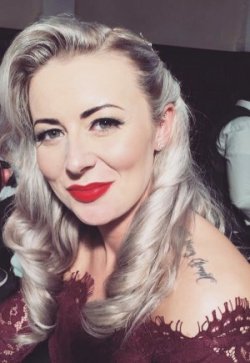 My story might be different to some as I started having smear tests at the age of 21, which was what used to happen in Scotland, and I also had the HPV vaccine when I was younger - I was one of the first years to be offered it. When I was 22 I had my first cell changes and had to have cold coagulation treatment. I was then monitored on 6-monthly smear tests for a while, and then yearly. In 2019, I had another abnormal result and had to have a biopsy and the LLETZ treatment done.

Two weeks later, the results from the biopsy came back and I was diagnosed with cervical cancer at the age of 28. There was then a four week wait to find out about staging. This was because there was still inflammation from the LLETZ so I understand why but this was very, very hard and scary. This was four weeks when I had no idea whether it was stage one or stage four, and no idea what the treatment plan would be. However, in November 2019 it was eventually staged at 2b.

Before starting the treatment for the cancer I had IVF and froze my eggs to try and preserve some sort of fertility, as the option to have children naturally has been taken away from me. Having kids was something I saw in my future plans but me and my partner still felt we had lots of time for this. Unfortunately cancer does not care about this. IVF was difficult, with daily injections, and you’re in and out of appointments every few days. The mental aspect is hard too as you’re aware that the choice has been taken away from you.

My treatment started in January 2020 and it involved chemotherapy and radiotherapy for six weeks and then brachytherapy in the last two weeks. It’s the hardest thing I’ve ever had to put my body through - mentally and physically. The schedule is intense, I had treatment every day for 6 weeks with weekends off. The side effects are something you don’t expect and the tiredness affects me the most. Going about your daily life is much harder, walking up the stairs feels like a marathon. Even though I was always active, always ate really healthily, it still can happen to you. If you’re young, fit and healthy you usually think ‘you’ll be fine’. Again, cancer doesn’t care about your future plans.

Towards the end of my treatment I had brachytherapy. I was so nervous about this and had no idea what to expect. It’s so weird only being able to lie flat once the rods have been put in you. I have to say that the nurses who looked after me were so good – I’ve never experienced anything like the care they gave me. Even though the treatment was so hard, I almost looked forward to going back into hospital to catch up with everyone! And then I was finished.

My partner got me through the worst days – when I felt rubbish he would pick me back up and keep me positive, or sometimes just let me have a big ugly cry all over him! It definitely was a trauma to go through, but I’m only starting to realise this now. I had so much going on like IVF before I started treatment and so many scans, I didn’t really have any time to process what had happened to me. Being positive was the only way to get me through it – I didn’t want my family to see me upset. It all hit me at the end when you have time to process it… however this was also when coronavirus started to change life for everybody.

I was supposed to have the first review of my treatment in April, but this was cancelled and now has been pushed back to August. This is tough as I’m not sure if my treatment has worked. You’re left in a bit of a limbo wondering whether or not it has all gone. I’m trying not to think about it too much as it would drive you completely insane.

One of my nurses (a gynaecology cancer nurse specialist) has been absolutely incredible, a godsend – I don’t think I could have done it without her. I can call her for anything – if I need to ask about whether or not my symptoms are normal, or I’ve called her just to cry or have a bit of a meltdown. I know she’s just doing her job but she really is amazing at it!

I have good days and bad days health-wise. The symptoms of the menopause, like the sweating at night, really affect my sleep so they are the worst. I’m trying various herbal remedies to see if these help at the moment before I am told whether or not I’m allowed to go on HRT.  I get really impatient because I find it hard that my body and my health are so different to where I was beforehand. Even four months down the line, I get so tired and my joints can be really stiff. Plus I put on a lot of weight during my treatment due to taking steroids for ten weeks, which didn’t make me feel good.

"I had never struggled with my mental health before, but nothing is normal anymore"

When the lockdown was announced in March, I was gutted. The only people I’ve really seen since January are my family who were taking me to appointments – I really feel like I’ve been in lockdown since January when I began treatment. It has started to feel a bit like a new normal. I finished treatment and had all these plans – for everyone who said they wanted to take me to lunch, I had a long list of restaurants I wanted to go to. I had plans for nights out, holidays, spa days, all cancelled. It’s annoying, even though I understand why. Although, when the lockdown was announced, one small mercy was that people understand a little bit of what I was going through. Everyone is in the same boat as me now and it’s not just me in lockdown!

Before all this, I used to go to fitness boot camp classes. The coaches have shifted everything online, so I can still do some exercise, which is giving me a wee bit of structure. I’m not as fit as I used to be, but I can do some of it. It really sets me up for the day and has really improved my mental health. I had never struggled with my mental health before, but nothing is normal anymore. I’m not seeing family, I don’t have work to distract me, so it does hit you hard and get you down some days. I’ve found exercise really helps me, as well as the support I get from my coaches and my fitness family!

I speak to my family all the time, and they have been amazing, but FaceTime doesn’t compare to a good cuddle. It’s horrible not being able to cuddle the people you love when you are going through something like this.

I would say that you could take this time to think about what you might not have been able to do before because you were too busy. I’ve been trying yoga – giving myself that half an hour to relax and take the time for myself has made me feel better. I’ve been making sure I pamper myself too. I’ve not felt great the whole time, given that my roots are down to my eyebrows! But sometimes doing my hair and my makeup has been a really nice boost.

My puppy has also helped so much. My partner got me the puppy 2 weeks after my diagnosis - we had talked about it before, but as we’d had to cancel a holiday after my diagnosis, it seemed like an ideal time. It has been amazing during the lockdown to have her – so helpful, and a great distraction.

I think the loss of fertility may have hit me harder than having had cancer. I’ve been robbed of the experience of being pregnant. Getting our puppy has filled the void a little bit though! I know I have options in the future, like adoption – I like the idea of giving a child a second chance, as I feel like I’ve had a second chance to live. But for now, I’m focussing on myself and getting well.

If you've been affected by cervical cancer, Jo's Cervical Cancer Trust can support you - find out how >

"The whole experience of cancer and COVID has brought a huge opportunity for me to reflect upon my life and my relationships"
Read Lissa's story
Last Updated:
04 Jun 2020