Suzie on going from palliative treatment into remission 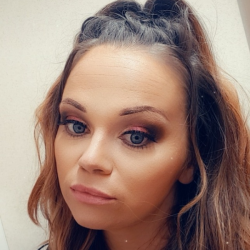 In October 2014, I started visiting my doctor with changes to my discharge - I had never had it before. It was mild but there was enough of it to have to wear a pad and change it every hour. Over the next 3 months, I had a lot of hospital visits and tests and examinations. During one exam, a nurse saw something on my cervix. I was sent for a biopsy, they were about 95% sure that it was cervical cancer, but couldn’t say for certain. The waiting was horrible.

I was diagnosed with cancer in January 2015. This totally shattered my world. My daughter was only a year old. After lots of different scans (MRI and CT), and other tests, they found a large mass in my cervix. I was given the option between radiotherapy and chemotherapy, or a radical hysterectomy. For me and my husband, there was no choice  - I had to have the hysterectomy. I had my beautiful little girl and I needed to be there for her. Perhaps if I hadn’t had my daughter I would have felt differently, even though there was no guarantee that I would have been able to have children after the chemoradiotherapy.

"They got clear margins, but not as clear as they wanted"

In March 2015, I had a radical hysterectomy which was done using robotics. They left my ovaries inside so that I was not put into the menopause. The operation was a success and they got clear margins, but not as clear as they wanted, so I then had preventative radiotherapy for 4 weeks.

The radiotherapy was brutal and totally wiped me out. I had it every day apart from the weekend. In May after radiotherapy had finished, we thought that was it. However, a few weeks later I woke up in the middle of the night in excruciating pain. We called an ambulance and I went into hospital. We found that I had a blockage in my kidney, and had a really serious kidney infection. I had a stent put in to keep it open. This was meant to be temporary, but now it’s permanent as it closes up when it is removed. I will have to have an operation every 6 months to change it over.

On this visit to hospital, they also found I had cancer in my stomach lining and in my lymph nodes.

"I lost all my hair, and with it all of my confidence"

I began 6, which turned into 8, rounds of intense chemotherapy. They added 2 rounds because I was coping very well with them. They took ages - 13 hours every week. At the beginning, it was very bad - I never react well to any tablets so getting the steroids right was very difficult and made me poorly. Eventually we found one eventually which worked. Once they sorted that, apart from feeling tired and nauseous, it was fine.

I was also eligible for an American trial and my doctors were really confident in it, which was a different kind of chemotherapy. I lost all my hair, and with it all of my confidence. Losing my eyelashes and eyebrows bothered me more than the hair on my head.

I always told my oncologist that I just want to know the basics and nothing in depth, which is probably why the next thing that happened was such a surprise. I was having treatment one day, and my nurse came round to check on me at night. I looked at their paperwork and saw the word ‘palliative’ on it. I asked if that was for me, and couldn’t believe when they told me that yes, my treatment was palliative.

I was told that I might have to have treatment for the rest of my life. I didn’t know what to say and I totally spun out. I wasn’t aware I was in that position and my mental health took an enormous dip. I could not stop thinking about whether or not I’d get to see my little girl growing up.

I finished chemotherapy in December and my first checkup was in March. There were still signs of cancer, but nothing active. At my 6 month scan, everything was gone. I had gone from having palliative chemotherapy into remission. I didn’t believe them at first. I went home and rang my oncology nurses, I had so many questions. They told me ‘no Suzie, you don’t need to worry anymore, unless you have any big changes, you’re on the right track to full remission”. It took a while to start to believe it.

I have a huge amount of anxiety every time my scan comes around - waiting for the results is torture! My last scan was in August 2020 and everything was fine. I never look at stats, but as but I do read the Jo’s website and I’m aware that as the years go by, the likelihood of recurrence drops - I tell myself that every scan makes it less and less likely that it will come back.

I couldn’t have gotten through without the Jo’s Forum. I met some people who I became friends with, even from different parts of the world. I had an American friend who was on a similar path to me and we became really close friends. We would discuss experiences and tips, even small things like the best types of food to eat when you’re having chemo, or the best kind of body washes. She very sadly passed away, but I am so grateful for the relationship that we had.

I was so positive about everything that people thought I was putting on a front sometimes, but I wasn’t! I knew that I couldn’t change anything that was happening, and I didn’t want to dwell on things. I just tried to keep a positive attitude and distract myself. Of course, being told that my treatment was palliative was awful. But I went through the motions and I was determined to enjoy life and everything that I could.

"The HRT patch regulated my moods"

The chemotherapy put me into early menopause which was a new battle in itself. Again, I’m not good at taking tablets so it took me a while to find something that worked - eventually the HRT patch regulated my moods. It was very hard to go through aged 31. If you ask me, the worst bits were my hot flushes. If you ask my husband, it was my moodiness! I had such a short fuse and everything wound me up, but thanks to the patch it’s much better.

My stent causes me more problems than anything. If the changeover of the stent is overdue, I end up with terrible infections and a couple of bad ones have put me in hospital. I know why it’s there and it’s definitely the best option as the alternative would be having bags.

Sadly, my stent operations were affected by Covid. I was meant to have it changed in March and I went for my appointment and my pre-op before lockdown, but then the operation got cancelled and they could not give a time that it would be rescheduled. Luckily for me, my work paid for it to be done privately in June, otherwise I have no idea if I would have had it by now.

"I keep on smiling"

I feel grateful for everything and absolutely everything is different now - it definitely was a life-altering experience. I went back to work about 2 years after my treatment, and had a total change in careers. I was really ready for something different - I was used to being ‘cancer patient Suzie’ and ‘mum Suzie’, so I was ready to do something that was just for me, and I settled into my new job well.

It's caused a lot of stress and heartache for my family but I keep on smiling. Everyone asks why do you smile and how? I say because I have to. It's how you get through life. I didn't want to talk about my story but now I need other girls to know the signs and I need people to go for smear tests.

You can get support about any aspect of cervical cancer here >

"Facing a loss of fertility at such a young age was pretty tough"
Read Maria's story
Last Updated:
27 Nov 2020