Tessa on life after cervical cancer 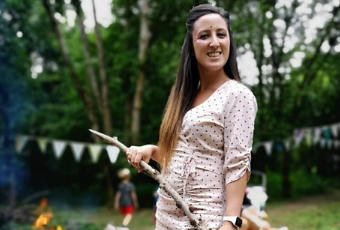 My journey started in February 2008 after my first smear test when I was 24. I'd been having a few problems with irregular bleeding for over a year and slowly it had been getting worse. I wasn't worried as it never occurred to me that bleeding was a sign of cancer. I had never been educated about cervical cancer, so I continued to tolerate the bleeding for another six months.

Six weeks later, my results confirmed severe cell changes and I was referred for a colposcopy. Three weeks later the doctor took a biopsy and gave me that look that means it's not good news. "It's the worst cervix I've seen in a long time; best case scenario is that it's just pre-cancerous cells."

Four weeks after the biopsy I went to collect my results; I had prepared myself for the doctor to confirm that I had cancer. I then met the oncologist and he explained the next step would be a cone biopsy in May. The results of the cone biopsy showed they hadn’t been able to remove all the cancer so more technical surgery was needed. I was then referred to The Royal Marsden. Because of my age, preservation of my fertility was very important.

In July at my appointment at The Royal Marsden new information showed neuroendocrine elements, which meant my cancer wasn't straightforward as hoped. These tumours account for less than 1% of cervical cancers and are a very rare and aggressive type of tumour. So, suddenly, instead of fertility-saving surgery I was told "The priority now is to save your life”.

After six cycles of chemotherapy I was to have a radical hysterectomy. I was devastated as I was suddenly told I would lose my hair and will never be able to carry and give birth to my own child.

I started chemotherapy immediately. It only took a few days for my hair to start falling out. A few strands at first then I'd wake up in the morning with my pillow completely covered. After a week my hair had thinned so much I decided to wear a wig.

In November I had my surgery. Whether they could keep my ovaries depended on what the surgeon saw when he looked inside me. I woke up in recovery to find they’d kept my ovaries and performed the whole surgery via key hole. I was so relieved. The surgeon decided I didn't need any more treatment and so far so good. I didn't have any side-effects from the surgery and recovered really quickly. My hair started to grow back, I no longer wear a wig and I found full time work as a nursery assistant shortly after.

"When it ended, I had a blank slate and felt I could do whatever I wanted with my life"

I am now ten years on from my cancer treatment finishing. When it ended, I had a blank slate and felt I could do whatever I wanted with my life. But what did I want to do?! I decided to train as a nurse and qualified in 2013. For the last six years I have been working at a specialist Cardiorespiratory hospital and have recently become a Sister on the Paediatric Intensive Care Unit. I also work for an Children’s Intensive Transport Service that transfers critically sick children to intensive care units and I am, somewhat miraculously, finding time to study for my masters too. I truly love my job and don’t think I would have taken this route had I not had the experiences I had.

Alongside work, I also volunteer my time doing charity medical missions where a team of us provide cardiac surgery to children in developing countries. Not only does it allow us to share information and skills with new people but it has allowed me to see places that I perhaps would never have chosen to visit.

In regards to home life, I am single and living on my own in South London. I can’t deny that infertility has had an impact on romantic relationships, but my determination to be happy and to live life the way I want to has probably had an even bigger impact. I am 35 now and most of the time my cervical cancer journey feels like a lifetime ago but there are times when it also feels like yesterday. My diagnosis and treatment came at the same time as Jade Goody’s and with recent media coverage on her story it naturally brought up the feelings I had during my own treatment and around her death. I have been incredibly fortunate to turn one of my worst experiences into many many positive things and I will always be grateful to the Jo’s team for providing a safe place to share my story.

"Jo's has been there from day one of my diagnosis"

I am proud to say that I had the opportunity to help others through media interviews, government campaigns, petitions and volunteering with the helpline and although I have moved on with life, Jo’s and my cervical cancer treatment will always be a major part of why I am the person that I am.

Jo's has been there from day one of my diagnosis. It is a community that I felt comfortable in straight away and where I have met friends for life, which is such a positive thing after having gone through such a terrible experience. It is a place where you can find strength at a time when you're at your weakest!

"I can put things into perspective a lot easier than before"
Read Gemma's story
Last Updated:
27 Aug 2019